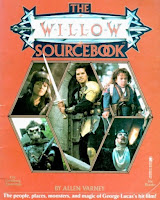 I have something to confess: for this fifth instalment of the ‘Lockdown Challenge’, I have cheated. The game I’m generating a character for does not exist.  Or rather, it does exist, but you have to read between the lines.

The year is 1988. At the time, there was no Open Gaming Licence, no D20 craze, no OSR, no retro-clones, nothing. In 1988, the only way to publish a gaming supplement that uses Gary and Dave’s rules is to have it published by TSR, period. Anything else is illegal.

So what the Willow Sourcebook (written by Allen Varney and published by Tor Books) does is that it is presented as a setting for a role-playing game that is never mentioned, never made clear, never described in the book itself. As I have written above, you have to read between the lines.

The book basically presents the world of the ‘Willow’ film (races, geography, history) and then stats all the characters from the film using the inexistent, unnamed RPG’s stat blocks. By analysing all the stat blocks, I have sort of managed to reverse-engineer the chargen system.

Without further ado, I present to you Arthemain, a Senkadi druid. Although the only druids in the film are evil, the sourcebook explains that there also exist neutral druids, called the Senkadi.