It's been a hectic year in our industry... It's been slightly over a month since Charlie Krank got ousted from Chaosium and replaced by Greg Stafford and Sandy Petersen, and now it's been announced that Moon Design are the new owners of Chaosium. It's been all over the internetz now so I won't go into the boring details (which are here).

This is tremendous good news for Moon Design, for Chaosium, for the world of Glorantha, and for the Call of Cthulhu line. However, after reading the various press releases, announcements, FB and G+ posts, etc. etc., I was really really concerned and worried about the future of RuneQuest 6 and of its Adventures in Glorantha supplement because they were not mentioned anywhere.

So I was really relieved this morning when I read the following by Loz on The Design Mechanism's forum:


[All] this has implications for RQ and Design Mechanism and I will be posting a fuller discussion/news piece as soon as time permits. I can assure all our fans, however, that Design Mechanism isn't going anywhere, the RQ6 system continues, all our books will remain on sale and we will be continuing to release our own RuneQuest material.

But Pete and I will be working very closely with Chaosium, in official capacities, and we'll explain more as soon as time permits.

I can assure you all that this is Good News.


People tweeting from Gen Con, however, wrote that 'a new version of RuneQuest' had been mentioned during one of the Chaosium panels. So I guess at the moment the best we can do is wait for further official announcements from the various parties after the dust has settled.
Posted by 賈尼 No comments:

Moon Design wins the 2015 Diana Jones Award for Excellence in Gaming for the Guide to Glorantha.

That makes Greg Stafford a twice-winner, as he had already received the award in 2007 for The Great Pendragon Campaign.

Kudos to Greg Stafford, kudos to Moon Design, and kudos to all my friends who were involved in the project, and in particular to illustrators extraordinaire Dan Barker and Éric Vanel. We are all Us!
Posted by 賈尼 No comments:

Priests as Characters in TnT

This is an old quandary, possibly as old as the game itself: should there be Priests as a character class in Tunnels & Trolls?

The discussion has recently popped up on the Let's Talk About Tunnels & Trolls Facebook group. The Trollgod himself, Ken Saint-André, has explained that “there are no real gods in [Trollworld] T & T—just a bunch of very high level wizards pretending to godhood.” However, “priests, acolytes, monks, priestesses, temple girls, etc. are all common enough in Trollworld T & T. They are job descriptions, just like sailor, baker, tax man, attorney, shopkeeper, etc. If they use magic they can also be wizards, rogues, paragons, specialists, or citizens. If they don't use magic they can also be warriors or citizens. That's a big difference between That Other Game and T & T. TOG classifies character types by appearance; T&T goes by ability/function.”

I can agree with the explanation above. However, if you're not playing in Trollworld but in a fantasy world where gods are real, how do you manage that? Various ideas have flown round the FB group, mostly about having priests as a mere 'skin' for wizards or rogues. I have mentioned that I use T&T in Glorantha and that, true to the RQ2 feel I try to emulate, ‘priest’ in my games is a title and not a character class.

And then the article titled Mirabile Dictu!: Priests as Characters in T&T, by Dorothy V March, which was published in issue 17 of Sorcerer's Apprentice (1983), was mentioned again. This article gets mentioned each and every time the quandary is tackled, yet I still have to find someone who's really used it in actual play.

Anyway, since I'm tired of people e-mailing me and asking for a scan of said article, I will summarise it here.

There is a new prime attribute to be added to the other ones at character creation: DEVotion, and there is a new character class, the Priest, that uses DEVotion to fuel their spells — much like wizards use WIZardry to fire off theirs.
As explained earlier, priestly spells (called ‘miracles’) cost a given amount of DEV to be fuelled; when the priest's DEV is low and casting a miracle would require more DEV than available, the excess may be made up by drawing upon STRength at the cost of 2 STR points for 1 DEV point.
DEV regenerates through at least one full hour of prayer and meditation; lost STR will only regenerate after DEV is completely restored, at the rate of 6 ST points per hour.
Priests may only use one class of weapons, the one favoured by their patron god(s).
A priest may have a holy symbol that functions just like a wizard's staff in terms of focus and cost reduction.
Minimum attribute values to cast miracles of a given level are the same as the wizard's but replacing IQ and DEX with DEV and CHR.
The Acolyte is to the Priest what the Rogue is to the Wizard; he doesn't have any weapon restrictions.

The article then ends with a long spell list that takes up 4.5 pages, from the 1st to the 20th level. The spells are not whimsical and quite D&D-ish in their scope.
Posted by 賈尼 3 comments: 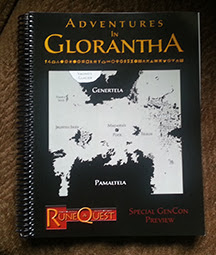 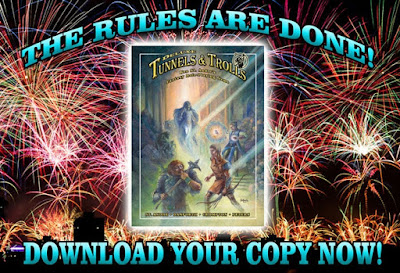 I have actually just finished downloading my copy of deluxe Tunnels & Trolls. At a whopping 385 pages, I gather it'll take me some time to digest it...
Posted by 賈尼 No comments: