The Howling Tower is my first foray into the Jonstown Compendium, the Chaosium-sponsored corner on drivethru rpg where fans can sell their own RuneQuest content. My contribution is minuscule (I have made sure everything was consistent with the latest edition of the rules, and I have written the stats of the pre-generated characters): the original author of the adventure is Devin Cutler, and Dario Corallo has been the driving force behind this endeavour, doing the layout, the artwork, choosing what should get in and what should stay out, etc. so it's definitely his baby. Moreover, Dario has transformed a mere adventure into a fantastic adventure pack by adding virtual tabletop maps and counters, handouts, enlarged maps, etc. 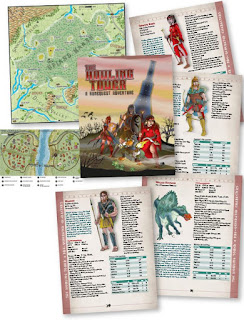 Irrespective of my involvement, I really recommend you purchase this adventure pack: if you buy The Howling Tower, you will get everything needed for several session of Old School fun via virtual tabletop play (quite useful in these pandemic times), plus loads of re-useable setting material for any RuneQuest campaign set around the Upland Marsh and/or the village of Two Sisters, or even in north-western Sartar.

Monsters! Monsters! is a delightful role-playing game running on the Tunnels & Trolls engine that lets you play the role of the bloodthirsty, flesh-eating, mayhem-bringing monsters instead of the usual puny and boring humans, dwarves or elves.

Thessaly Chance Tracy, GM and T&T advocate extraordinaire, has been working on a grand Monsters! Monsters! setting and campaign for years (you can read about it in issues 1 and 2 of The Hanging Garden), and her work is at last going to be published. I believe Thessaly’s setting is to vanilla fantasy what Sergio Leone’s films were to the western genre: a sonorous wake-up call accompanied by a huge kick in the arse.

After the good news, more good news: there’s so much stuff that the setting and the campaign will be published in several volumes. The first one is titled Uprising at Buzzard’s Gulch and it will contain the setting, the maps, the NPCs, and countless adventure seeds and hooks. The cover is just amazing:

The second book will be an adventure, titled Beatdown At Big Battle Ridge, and it should be released very shortly after Uprising.
Then a second adventure (and third book) shall follow, titled Desperately Seeking Plumb Gorgeous, in which the monsters seek to kidnap the most beautiful girl in all the land [Monsters! Monsters! notoriously rewards monsters with adventure points for kidnapping beautiful girls].