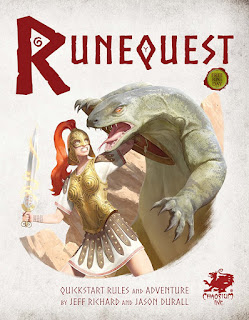 The RuneQuest 4 quick-start rules will be available for the 2017 Free RPG Day, accompanied by a scenario by Jason Durall. Can't wait to put my grubby hands on this — even though no French FLGS is usually participating :-(
Posted by 賈尼 1 comment:

Lots of news with regard to the ‘New’ RuneQuest, a.k.a. RuneQuest 4, from Chaosium. There are so many news I am almost going to copy them verbatim from their web-site.

First and foremost, RQ4 is not going to be kickstarted (and that’s an excellent piece of news: I consider crowdfunding campaigns should be restricted to amateur publications, or to very special operations [like extra art or crazy miniatures] when used by established companies). The RQ4 books will go through a ‘normal’ process of being sold via PDF first by Chaosium, and then in dead tree format both by Chaosium and by gaming shops. The current schedule is: RuneQuest and the RuneQuest Bestiary will be available for purchase by Christmas 2017. That’s in physical form purchased from the Chaosium web-site— and the PDFs will be available some months before. The books will then be in our FLGS in Q1 of 2018.

In addition, and still targeting Christmas 2017, Chaosium should be releasing the GM’s Screen and Pack, which will include a scenario, a GM screen, cult information sheets for the players (very helpful in choosing which Rune Spells to cast), maps, and a Gloranthan calendar.

After that, the next book will be a collection of stand-alone scenarios, with Gloranthan luminaries such as Steve Perrin, Ken Rolston and Chris Klug amongst the writers. Scheduled for Q1 2018.

Next will be the RuneQuest Gamemaster Book. This will include lots of GM-oriented rules (battle rules, magic items, etc.), materials on running games for RQ set in Glorantha, plus fully statted-up and described encounters that will enable sandbox play in Dragon Pass.

After that comes the Cults of the Lightbringers, the Hero’s Book, an organised RQ Play campaign, and the Dragon Pass Campaign.