Races and Creatures of Umathela


Some of the many races and creatures of Umathela have already been mentioned on this blog:

From the Gloranthan Bestiary:

There is a large section devoted to advice for the GM, and another large section that explains when to award experience points, and in what amount.

This latter section is really detailed and provides many many examples. I believe it should be really useful for anybody using the rules as written — which is not my case: I tend to award a set amount of experience points at the end of each session so that the players can improve their PCs by the time the next gaming session starts.
Posted by 賈尼 No comments:

OK, after having perused the new French-language edition of Tunnels & Trolls, I must agree that calling it "8th edition" is somewhat of an exaggeration. What Patrice Geille has done beyond translating the rules is mostly re-organising them in a more logical, structured way (7th ed was such a mess!).

Combat is the part that has received the most in-depth treatment, and indeed I can see a rule that I don't remember having seen in other editions (but then I'm not a big T&T expert): any damage inflicted through spells and/or missile weapons at the beginning of an encounter is added to the rolled damage total of the first round of combat, which is actually tantamount of keeping track of said damage twice. Now the rules say this is to reflect the 'shock' value of that damage; however, I don't think I'll apply that rule.

There is also quite an extensive part dedicated to poisons and their various effects, which I don't recall having already noticed in previous incarnations of the rules (possibly as an extra in the 30th anniversary CD).

More in future posts as I continue reading the rules and writing down small notes.
Posted by 賈尼 4 comments:

The following is almost a direct rip-off of Scott's Mushroom People but hey, Scott said it was OK :)

Pamaltela is notorious for its dangerous forests and its death-filled jungles. Many delvers have tried to explore them, few have ever returned, and usually to die a horrible death as plants would burst out of their ears and eyes.
Unbeknownst to most adventurers, deciduous trees and evergreens are not the only perilous plants in Pamaltela — there are fungi of all sizes too! And just like True Elves are basically sentient trees, Voralans are sentient fungi.

Although smaller than True Elves and misshapen, and despite their being loth to combat, Voralans can be just as dangerous opponents as True Elves because of their mastery of noxious spore-based attacks. Whether these attacks are "biological", as claimed by the God Learners, or magical, as assumed by sane people, is beyond our knowledge. Whatever the truth, these spore attacks are destructive and unpredictable.

T&T 8th ed. is at last in my grubby hands! I've only had time to quickly skim through the book. It has 137 pages, a very clear lay-out, numbered paragraphs, and a real character sheet. And of course new illustrations by Liz Danforth on top of the classic ones. What it is still lacking is an index. 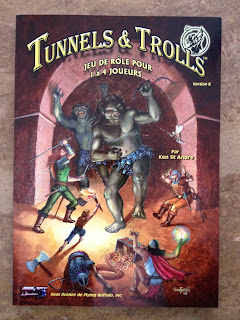 T&T 8th edition (in French!) is available on Lulu at last, apparently in dead tree only, for £17.21. More on this much-expected product as soon as I can lay my grubby hands on it.

Here's the blurb of the French edition of T&T:


And here's the foreword, by Ken St André himself:

As implied by their name, Plant-Men are sentient plant beings. While some may appear to be of very human-looking appearance, most feature completely vegetable traits. Some may have leaves or vines for hair, or a greenish hue to their skin, others are covered in bark or have non-animal twists to their limbs. Their eyes have neither white nor pupil. This latter trait renders their gaze particularly alien and unsettling to other humanoids. Cool sap circulates through the body of a Plant-Man, not warm blood. Plant-Man religion is likewise alien to other sentient races; Plant-Men hold animistic beliefs yet a number of named deities are known to outsiders. This is has proved extremely puzzling to the ever-cataloguing God Learners.

Plant-Men are called Wort-Men by the Umathings, and Elves by the Westerners with a further, finer distinction based on colour, as there are several types of Plant-Men. Three of these sub-species (brown, green, and yellow) are called True Elves by the Westerners. Plant-Men obviously do not use these exonyms but refer to themselves with a variety of different endonyms that depend on their plant association (see names in green below).
Plant-men have almost disappeared from Umathela proper, but are quite numerous in the forested lands around it. 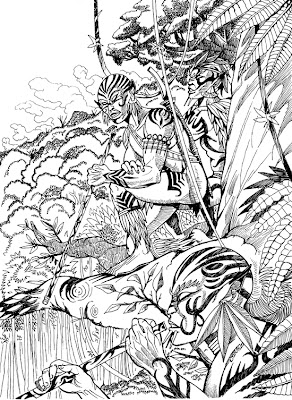 As mentioned above, Plant-Men come in an array of forms and sexes:

Dryads
Dryads are the female Nymphs of the woods, and are far more magical than other Plant-Men. Each Dryad is the protective spirit of a given grove of trees, which she may control under certain circumstances. The role of Dryads in the reproductive cycle of Plant-Men is often of paramount importance.


Pregnant Dryads give birth to a large seed, not to a living being. The seed is planted, and it grows into a shrub. After two years, the shrub bears a fruit, which contains the child.

Brown Elves [Mreli]
They are associated with deciduous forests, and with trees such as aspen, birch, and oak.
They hibernate in the Dark Season, looking for a hollow tree or a comfortable hole in the ground in which to remain comatose until the Storm Season.
Brown Elves are both male and female, and also interbreed with Dryads, who hold important positions in brown elf society.

Yellow Elves [Embyli]
They are associated with rainforests, jungle evergreens, and palm groves.
They are wholly male and breed with Dryads for procreation.
They are quite aggressive vis-à-vis humans, especially Westerners. In Pamaltela, Embyli are organised in Dryad-ruled queendoms that resist the encroaching human civilisation. These bellicose Yellow Elves are particularly present in the lands to the east of Umathela, where they have fought many deadly wars against the Middle Sea Empire.

Green Elves [Vronkali]
Of the three races of true elves, the Green Elves are the most human-like, having for instance a similar sleeping pattern to the humans', and living in village-like communities with males and females. Vronkali are taller and stronger than any of the other Plant-Man species.
They are associated with coniferous forests, with trees such as fir, pine, and spruce.

Black Elves or Voralans
Hermaphrodite, diminutive squat humanoids with grey skin, and swollen limbs or heads, who inhabit the rare toadstool forests. They are shy, keep to themselves, and avoid combat. However, they can be formidable opponents because of their strange spore-based biological weapons to which they are immune.

Red Elves
Also called called Slorifings by the Umathings, and Goblins by the Westerners. They are small and stunted Plant-Men who inhabit the great swamps to the west and to the south-west of Umathela, thus far from human civilisation. They are associated with ferns and mosses rather than with trees.
Goblins are known to eat humans and to obey a cruel Sorceress Queen. All Slorifings are male, and need diminutive vile-looking Dryads called Olarians to mate.
Posted by 賈尼 No comments: