The Order of Cerberus

MRQII is dead and Mongoose has lost the licence, but the Italian version of MRQII by Asterion Press (with way better quality and nicer art, especially for the Monster Coliseum) is still alive... Such are the intricacies of game licences.

A community site dedicated to the Italian version of MRQII has been created. It is called the Order of Cerberus and features news about products and cons in Italy, a free introductory scenario, and several gaming aids such as new creatures, magical items...
Posted by 賈尼 No comments: 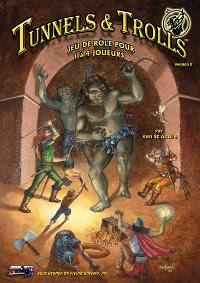 Because of my intolerance to the recent "buzz" about a 5th edition of D&D, I had recently jokingly posted about an 8th edition of T&T.

Well, believe it or not, there is going to be an 8th edition of T&T: it will be based upon the rule book and the magic book of the 7th edition published by Fiery Dragon, but with a different, improved presentation (I agree 7th ed. was horribly presented... what a mess!). Some excerpts from Flying Buffalo's 5.5 ed., and which were not included in Fiery Dragon's, will also be incorporated, again for clarity's sake, plus some bonus stuff like firearms, poisons, a glossary of arms and armour... Ken St. André himself will add some more bonus stuff. And it will only be available in French, at least at the moment.

Much of the art will be from the 5th ed. by Flying Buffalo, and Liz Danforth is adding some new art. You might even have a say in what she will be drawing — more on her blog.

GM Questionnaire
Repost and answer. Or, if you don't have a blog, answer in the comments. Or be a big rebel and do neither [OK, I did both].

1. If you had to pick a single invention in a game you were most proud of what would it be?
That would be when I ad-libbed an entire session when in high school. At the time, following one's notes or a pre-published module was the gospel.

3. When was the last time you played?
Two weeks ago.

4. Give us a one-sentence pitch for an adventure you haven't run but would like to.
You're cornered and there's no way out except through the ghost town.

5. What do you do while you wait for players to do things?
Fix myself a tea/coffee.

6. What, if anything, do you eat while you play?
Fruit or weird Chinese snacks.

8. What was the last interesting (to you, anyway) thing you remember a PC you were running doing?
Crashing through a well-defended fortress through the front gate on a berserk elephant.

9. Do your players take your serious setting and make it unserious? Vice versa? Neither?
I've had this kind of issues running CoC, I guess because the players know they're supposed to be serious and so they're not. This is why I don't run CoC any longer. What I do is I run weird fantasy. The players aren't expecting mind boggling monsters so when there's one they're all panicky.

10. What do you do with goblins?
Er, no goblins in my games.

11. What was the last non-RPG thing you saw that you converted into game material (background, setting, trap, etc.)?
A photograph of an incredible vertical shaft in China.

12. What's the funniest table moment you can remember right now?
Back in university-- I was running a Star Wars game and the players were about to shoot down an Imperial ship. One of the players shouted 'You're crazy... There could be gold on it!'

13. What was the last game book you looked at--aside from things you referenced in a game--why were you looking at it?
LotFP Tutorial book. Playing the solo adventure.

14. Who's your idea of the perfect RPG illustrator?
Dario Corallo.

15. Does your game ever make your players genuinely afraid?
See No.9.

16. What was the best time you ever had running an adventure you didn't write? (If ever)
Honestly I think I've always enjoyed my adventures more than pre-written ones.

17. What would be the ideal physical set up to run a game in?
A castle.

18. If you had to think of the two most disparate games or game products that you like what would they be?
T&T and LotFP?

19. If you had to think of the most disparate influences overall on your game, what would they be?
Hongkong action movies and Central/Eastern European mythology.

20. As a GM, what kind of player do you want at your table?
Players looking for role-playing and immersion.

22. Is there an RPG product that you wish existed but doesn't?
Yeah, there was... so I wrote it!

23. Is there anyone you know who you talk abotu RPGs with who doesn't play? How do those conversations go?
I had a colleague who played boardgames but not role-playing games. He just kept saying 'Yeah, I'll have to try' but never did.
Posted by 賈尼 No comments:

OK... I'm reading Carcosa. I am also a playtester for the upcoming Harreksaga by Moon Design, and our party is currently fleeing a gang of lily white-skinned cannibals on the secluded island of Teleos. Why me... I've always hated cannibal holocaust movies!

Anyway, since I'm reading Carcosa and recovering from the last game session at the same time, I have these weird ideas materialising in my feverish brain about using Carcosa for a Second Age weird fantasy campaign at the centre of Glorantha. Right... Carcosa = Teleos. The size of the map is right. The dinosaurs are right. The cannibals are right.

Here are the correspondences that have popped up in my head:

Too Many Good News! Part Two: The Design Mechanism To Launch Free Magazine! 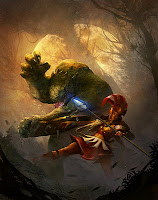 The Design Mechanism will be launching a free PDF magazine available from their web-site. The magazine will focus on RuneQuest 6th ed. and other games based on the Basic Role-Playing system. Issue No.1 should be available at the end of January and is rumoured to provide a few little snippets from the upcoming RuneQuest 6 rule book!

At the moment it appears that the as-yet-unnamed magazine might also feature Gloranthan content, thanks to the partnership between The Design Mechanism and Moon Design.

Stay tuned for more information...
Posted by 賈尼 No comments:

Too Many Good News! Part One: Wyrms Footnotes Returns! 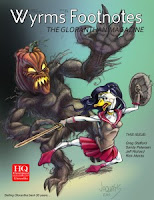 Despite all the gloomy articles and interviews I've been reading about the state of the rpg industry, I am of the opinion that our hobby hasn't been in a better shape for decades. But then industry ≠ hobby. Oh, well.

Moon Design have just announced the come-back of the Gloranthan magazine Wyrms Footnotes, after a hiatus of 30 years (!). I am particularly pleased with their decision of labelling the new issue as issue No.15 and not as No.1. This is a good "continuity" message for us fans, and also (IMHO) a sign that this magazine will bridge the gap between old- and new-school gaming. Hooray!

Real Gloranthan fans will have noticed that the artist of the cover is none other than Jennell Allyn Jaquays who (as Paul Alan Jaquays) was extremely influent, both as a writer and as an artist, at the time of the original RuneQuest 2.