Alas like most of you guys I haven’t been able to go to Dragonmeet in London (one day I will!).

Luckily Nick Brooke live-tweeted the Chaosium panel. For those of you who aren’t on Twitter (BTW I am Gɪᴀɴɴɪ’s Eᴠɪʟ Tᴡɪɴ on Twitter, follow me!), here is the transcript from Nick’s tweets:

“On the panel are Jeff Richard, Michael O’Brien, Jason Durall and Ian Cooper. 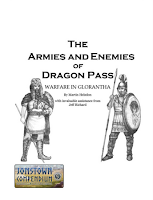 MOB solicits contributions written for RuneQuest Classic, RuneQuest Glorantha and HeroQuest Glorantha, and stresses that YGWV — “Your Glorantha Will Vary.” Canon does not limit community content: it’s a rod for the official publisher’s back only.

He mentions that Chaosium has identified several talented new authors through the Miskatonic Repository — the “Call of Cthulhu” equivalent — who have gone on to be published in Chaosium’s own books.

Jeff talks about Basic Role-Playing and QuestWorlds, an initiative to produce SRDs authors can use to produce their own BRP and HQ-based role-playing games. (Terms and conditions apply: there will be a new Open Gaming Licence for these)
Among those T’s & C’s: you can’t produce games about Lovecraftian investigations, Gloranthan heroics or indeed King Arthur and the Knights of the Round Table. Which seems fair enough, given Chaosium already print those.
And if you want to produce a game using someone else’s IP, you’ll need to obtain the rights from the owner (and good luck with that!), but Chaosium won’t stand in your way.
Like Jason’s Big Gold Book, the SRDs will contain all sorts of options, with the expectation that authors will pick and mix (and remix!) the bits they need for their games. Not use the whole kit and caboodle, every time.

MOB teases future libraries for Pendragon & Seventh Sea, once the Jonstown Compendium is up and running.

Jason talks about the next RQ book, “The Smoking Ruins,” containing big scenarios by Chris Klug and Steve Perrin, and opening up a major area to the west of Sartar.
After that, “Pegasus Plateau,” a collection of pick-up-and-play starting adventures for lazy GMs (like me). Lots of new authors in this, including John Wick (not that one), and another scenario by Steve Perrin.
The scenarios will take adventurers all over Dragon Pass and offer a whole range of different experiences.

Next: the “RuneQuest Starter Set,” including a guide to Jonstown and several scenarios for beginning GMs and players. Everything in the book will be new and useful to established campaigns: it’s not reprints, and any group could use the material.
Plus 14 pre-generated characters (incl. 7 from RQ:G core and a bunch more archetypes; Jason mentions adding some downloadable non-human characters).

The “RuneQuest Gamemaster’s Guide” will expand the game with plunder, Rune metals, heroquests, mass combat, etc. It will be exactly the right size to replace the GM Screen Pack in your slipcase set.

Finally (for now), “Cults of Glorantha” (Jeff has the complete manuscript in two volumes / 450 pages), and the “RuneQuest Campaign,” an adventuring timeline for the Hero Wars comparable to “The Boy King” for Pendragon.
That should keep them busy for the next 6-8 months. Other books mentioned include Troll stuff and Robin Laws’ reboot of Pavis in the Hero Wars timeline, but those are further off: they’ll be multi-book sets and won’t be available until everything has been finished.
So the pipeline feels healthy, and some of the next releases are in the late stages of layout, with art and maps aplenty. As always, there’s no commitment to publication dates — Chaosium don’t do that nowadays until a book is done and ready to ship.

Will there be more of an “Apple Lane Campaign”?
The players’ home stomping grounds for most RQ:G material is assumed to be around that area, and several upcoming scenarios will tie in directly — including “Return to the Rainbow Mounds.”
Jeff waxes lyrical about the huge master-maps of Dragon Pass and Prax he’s been constructing from Greg Stafford’s originals. Working at this scale is illuminating — e.g., you can see the Block from Boldhome.

Maps of the Holy Country? Nochet City, Seapolis etc?
A Nochet book incl. a poster map of the city is well advanced, and a Seapolis adventure and pack is ready for final content-edits as soon as Nochet is nailed down.
Plus scenario packs and sourcebooks for Whitewall and Heortland, allowing the latter to be used as a RQ:G character homeland (incl. event tables for parents and grandparents).
Nochet works in two directions: while you can have plenty of adventures without ever leaving the city walls, on the other hand it’s easy to hop on a ship and sail off to distant Kralorela.

Jeff dilates on how Battle rules will work — they’ll be not so much a wargame (working out which side won), rather about adventurers’ experiences on the battlefield.
So the Battle rules are player-facing: they determine what your heroes did in the battle, rather than which side won. (“What happened when the Crater Makers hurled comets at our army?”)
Player characters need to make Passion or Runic inspiration rolls to take any action that will make a name for themselves (e.g., taking on an enemy champion in single combat) — otherwise, they’ll sensibly hunker down with their units.

MOB’s hope is that eventually new RQ books will be coming out every couple of months (the same pace as CoC). Once Jeff is sitting on a mountain of loot, he may return to the “Prince of Sartar” web comic: he’d love to keep it going, but it’s a time sink.”
Posted by 賈尼 No comments: