This spurred me to look for the Perrin Conventions online again. Wow... great stuff. I'll certainly be using them a lot for Timinits & Trolls. Googling Steve's name on the internet also brought up an interview from about one year ago, which I had completely missed at the time. Definitely an interesting read, which I recommend.
Posted by 賈尼 No comments: 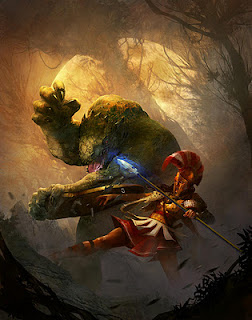 
RQ6 will be setting-agnostic, hence the funny names, but the obvious Gloranthan imagery is a Lunar/a Templar lost in the Pamaltelan jungle... which is pretty evocative in light of which Gloranthan locales this blog usually likes to explore...
Posted by 賈尼 1 comment: