[zine] Issue No.1 of Chromatic Soup is Out! 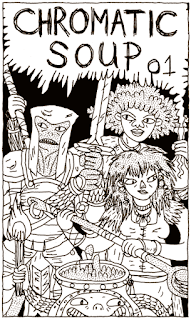 I am happy to announce that issue No.1 of the collective OSR dead-tree zine Chromatic Soup is available on lulu for a mere €4.88.

The zine started as a jocular idea on G+ by artist Cédric Plante (whose fantastic art graces the cover and the interior of the zine) and eventually developed into a 179-page zine that describes a fully-fledged weird and marshy setting known as ‘the Biting Marshes’.

The setting features a lot of crazy but extremely inspirational ideas in a ‘pointcrawl’ kind of presentation, with three beautiful maps. I would like to highlight the following:

Duke Arqueballast's scheming — This chapter alone could very well form the backbone of a complete sandbox campaign. Duke Arqueballast rules from a fortress barge towed by a hundred yoked crocodiles. If this is not OSR at its best, then I don't know what is.

Log-Jaws — The ecology of an Alien-like plant monster that can be tamed by the music of the Log-Jaws Pipers.

Stewpot Witches —This is probably my favourite. This chapter describes a cult of  witches who master a weird and very old form of magic native to the Biting Marshes. Each Stewport Witch has a familiar that looks like a walking iron pot with a huge face in the middle of the pot (like in the illo above). The witches may create magical meals within the iron pots. By the way this iron is called ‘bog iron’ and has peculiar properties.

Bobcatmen — A new race. They live in the northern part of the Biting Marshes as bandits of slavers. Their human thralls wear bobcat-like masks.

The Order of the Merchant-Knights — A quasi-religious order of merchants who ply their trade east of the Biting Marshes. They are actually quite similar to the cult of Issaries, but with a more military bent.

Last but not least, there is a ‘RuneQuest conversions’ appendix at the end of the zine to enable you to use all of the above with the RuneQuest Classic Edition rules.

Link to the free PDF version.
Posted by 賈尼 1 comment: 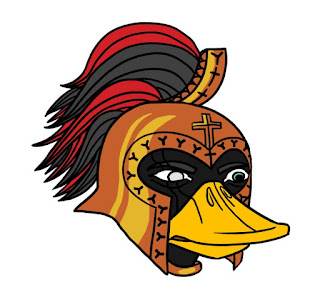 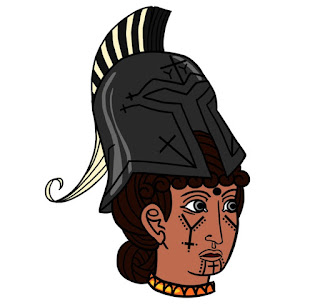 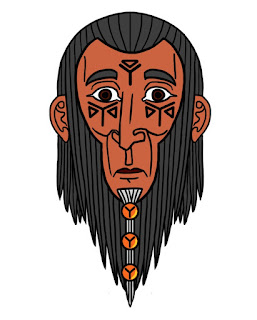