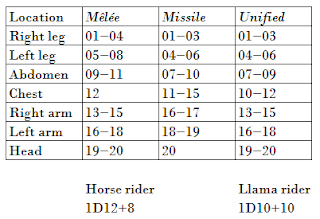 Also please remember that a combatant in a superior position adds +1 to the D20 roll for hit locations.
Posted by 賈尼 No comments: 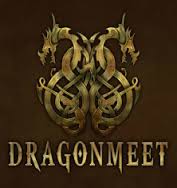 A few weeks ago, I asked, somewhat rhetorically and jokingly: Is D100 Dead?, because of the news from early this autumn that Chaosium would be scrapping the 2008 incarnation of the Basic Role-Playing system, fondly known amongst aficionados of the BRP system as the “Big Gold Book” (BGB), and the only one currently available.

[Yes I know about OpenQuest and Legend.]

Well, it now seems we're soon going to experience quite the opposite of the death of the D100, i.e., a plethora of D100-based systems! For those of you who do not follow G+, the gaming forums, etc., here are the latest news:


It hence appears that we will soon have three simultaneously in-print D100-based engines: BRP Essentials, the as-yet-unnamed generic D100 system by The Design Mechanism, and Revolution D100 by Alephtar Games.

These are the generic D100-based role-playing games; I'm not even mentioning that there are going to be two in-print Gloranthan D100-based FRPs in 2016: RuneQuest Classic and the “new” RuneQuest! An embarrassment of riches...
Posted by 賈尼 3 comments: 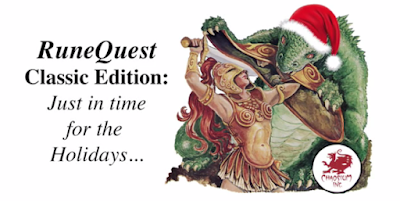 WHAT ARE YOU WAITING FOR??
Posted by 賈尼 No comments: