Back from the Eternal Con 2018

Yet another great convention. This one was a mere fortnight after Chimériades, resulting in a very weird 'embarrassment of riches' situation. I wish cons were regularly interspersed throughout the year...

As always we were welcome at beautiful castle-turned-youth hostel Burg Stahleck and given our room numbers. I ended up in the notorious snoratorium but since I had wisely added earplugs to my luggage everything went perfectly well.

I have already mentioned that the Eternal Con was a very family-friendly con, with many families with kids attending; I think this is the year when we saw most kids... If you have never been to a gaming con and have a family— honestly, this is the con to be!

This year Franziska presented us the schedule and the activities under the form of a choose your own adventure book. As a long-time T&T fan, I really liked the idea!

I won't bore you with the general RuneQuest stuff because (a) it was pretty much the same Jeff had already talked about at Chimériades, and (b) there was a dedicated RQ panel on Sunday (q.v.). As a result, I will focus on the non-RQ news that struck me as interesting.
First of all, we shall witness the return of two old favourites: the Credo card game, and the Nephilim role-playing game. The new edition of Credo is pretty advanced, whereas the new Nephilim is still under development.
There will also be a new edition of HeroQuest that will be non-Gloranthan in content so as to enable third-party publishers to publish games using the HQ engine.
As for Wyrms Footnotes, there should be a new issue soon (?) for some of the stuff that won’t get into the new RuneQuest: Roleplaying in Glorantha (RQG) books.

I just spent the morning relaxing with friends— after all these years, and with pretty much the same people attending, the Eternal Con has really become a gathering of friends!


Then I prepared the pregen PCs for my afternoon game (see below).

This was quite interesting. I have been running an RQG campaign set in Eastern Genertela in Paris as one of the playtesting groups for about a year, and two of my Parisian players were also attending the con. So I ran a one-shot RQG adventure that I also managed to include in the overall story arc of my RQG campaign game. That showcased to the new players (4 of them) how deeply intertwined with Glorantha the new rules were.

Played Massive Darkness, an incredibly daft miniature boardgame: open door, kill monster, take treasure... Jesus, are we still playing this in 2018??? The cool thing, however, is that the material is fantastic, and the miniatures quite evocative. Alas we got killed at about 3/4ths of completing our Quest.

Played Maria, an AWESOME three-player wargame by Histogame about the War of the Austrian Succession. I was playing Maria Theresa and had to face two enemies on two different fronts: the annoying Louis XV of France on the Western front, and the sly Frederick II of Prussia on the Northeastern front. Louis XV was trying to prevent my husband Whatsisname to become Holy Roman Emperor whilst Frederick II was quietly stealing large swathes of land from my northernmost estates. The first extraordinary idea of the game is that the same player who plays my enemy Frederick II on the Northeastern front plays my ally George II on the Western front, which led to... interesting developments. The second extraordinary idea of the game is that everything (battle results, diplomatic achievements, purchase of supply trains and/or reinforcement troops for the armies...) is fuelled by the use of cards so you're always hesitating as to how you should use them (obviously you never have enough of them) and, as we all know, a good game is about difficult choices.
And in the end I got to crush Louis XV and to slightly come ahead of Frederick II, so I was elated.

I got to play Illuminati for the first time in my life— can you believe that, the game has been around since 1982! I was playing the Servants of Cthulhu (whose aim is to destroy cards rather than to control them) but I think I exaggerated on the 'not controlling any groups' side and as a result I was always cash-strapped. Anyway, a good starting impression of this classic game.

Then I played an old favourite of mine, Nations the Dice Game, a very fast game of civilisation-building with a pleasant 'rolling dice' aspect (we gamers do love dice).

The sad, sad Closing Ceremony. I want to let you know that next year is the 10th Eternal Con and the 30-year jubilee of the cons in Bacharach, so there should be some special events. Be sure to attend!

The dedicated RQG panel. Here are a few news on top of the ones I've already mentioned in my Chimériades blog post. The triptych books should be available in hard format by Christmas 2018.
We had looooots of discussions about art, in the core book as well as in the future books. Jeff wants all of the future RQG books to look as good as the core book; e.g., Gods of Glorantha is fully written but work on art hasn’t started yet. And it’s going to take time because it will be good.


all the beautiful pics are by Heinrich Helms — all the ugly ones by yours truly
Posted by 賈尼 2 comments:

Back from the first con in con season! Funnily enough I was re-reading my 2016 report from Chimériades V, and at the time I was complaining that I had had too much work and hadn't been able to prepare anything for refereeing. Well... apparently April is a bad month for me because I experienced a much similar situation. As a result, the following is also going to be a very short report.

I will refer you to past blog posts for information about the incredible location, the beautiful château, the breathtaking views... The first piece of news is that this was officially the very last Chimériades con, as organisers extraordinaire Camille and Philippe expressed their desire to do something else in the future. There were various rumours circulating about other people organising a similar con in the future in the same area (Provence) but nothing your favourite sleuth could get any firm confirmation about.

True to its roots (and, to be honest, also due to Mark Rein·Hagen's accidental absence), the 6th edition of Chimériades was very much Glorantha- and RuneQuest-centred. It was heartening to see that, even though the last widely-distributed French-language RuneQuest edition set in Glorantha (the Oriflam one) dates back to 1987 –more than 30 years ago!–, there is still a large fanbase, and younger RPGers are still attracted to the game (the amazing art and maps for the upcoming RuneQuest:Glorantha that were being shown around probably helped).
Also, I felt more French gamers than usual made an effort to play in English.

As a result, maybe up to 1/3rd of the gaming tables were RQ:G tables. This bodes well for the future. Speaking of the future, we had several informal chats with the Chaosium staff present at the con: Jeff Richard (Vice President and Creative Director), Jason Durall (RQ line editor), Neil Robinson (COO), and also with several freelancers and/or 'old sages' who are currently helping Chaosium on the gigantic effort to rekindle our favourite game, plus there was a big panel on Monday morning about the future of the RuneQuest line. 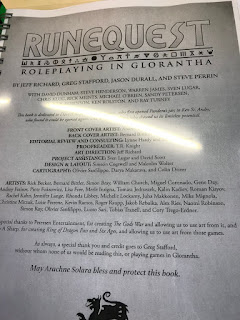 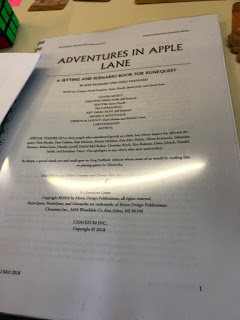 I guess the news everyone is most eager to hear about is with regard to the new core book. Well, we had a physical printout of the core book and it looked really finished, i.e., it included layout and art. The PDF should be available around mid-June, and the dead tree version around early August. The next books in the pipe are the ones that will complete the initial RQ:G triptych, namely the Bestiary and the GM Pack. These should be available around early December, although it wasn't clear if that would be in PDF or dead tree format.
The Bestiary is not only a Gloranthan creatures book (over 150 creatures, with stats and with a piece of art for each creature); it also contains everything needed to play non-human characters (chargen, cults, etc.). The GM Pack is really a setting pack, a Sartarite sandbox centred on the Colymar clan, with an astonishing map of Clearwine that was circulated, several scenarios, and a heavy emphasis on statted NPCs with a comprehensive background. Early 1626 Apple Lane will be the default base for player characters, in a kind of Wild West atmosphere of lawlessness after the demise of the Lunar Empire.

Many other books are currently being worked on, including some that are in an extremely advanced state of completion (i.e., they are not vapourware) like the Gods of Glorantha book, of which a printout was available for our perusal. The book contains lots of extended writeups or even entirely new ones, all in the familiar format from Cults of Prax. The cults in the Gods of Glorantha book are mostly player character-oriented cults; Jeff is working on a Cults of Terror-like book for the Chaotic cults. This latter book will probably include scenarios since it will be supposed to be read by GMs only.

Next in the pipe is a GM Book with rules for heroquests, magic items, and 'high-level' characters that is currently being playtested, and several other exciting ones, about which I have alas sworn an oath of secrecy.


But Chimériades is not only Glorantha.  My first game was in Jason Durall's Lone Star, a new RPG set in the independent Republic of Texas (1836-46, much smaller than today's state). The game uses the Pendragon engine, and, surprisingly enough, runs really well. As someone who really likes the Old West genre and its tropes, I am looking forward to this game, as there is a glaring absence of West-themed role-playing games WITHOUT magic/undead/whatnot in them.

My other two RPG games were both RQ:G games, one also by Jason with a short incursion into the Dream World, and the other one by Andrew Jones, which was a Runequestification of the introductory HeroQuest Red Cow scenario.

And, last but not least, I played two games of GMT Games' Command and Colours: Napoleonics on a giant table with painted miniatures, all created and refereed by the immensely resourceful and talented Grégory Privat (with help from Jean-François Bounes). We played with four people per side: one commander-in-chief, who played the command cards and who was not allowed to touch the miniatures or the dice, and three generals, one per battlefield section, who ordered and moved the units, and rolled the dice. Each commander-in-chief had 5 command cards and could use two cards per game turn that were given to two of the generals, the third general only being allowed to order a single unit (the one stacked with their leader). The orders also had to be sent at the end of that side's previous turn, in order to simulate the time it took for orders to reach the leaders from headquarters. As a result, we were always one turn late in term of reaction possibilities, which realistically enhanced the fog of war impression, and which basically added fun.
This being a game by Grégory, we also had fun objectives such as retrieving Wellington's ale barrels (for the British player) or the marshal's favourite caterer (for the French) for extra victory points.
A beautiful gaming table, fun rules, nice fellow gamers, two victories in a row— this was definitely my favourite part of the con ☺ 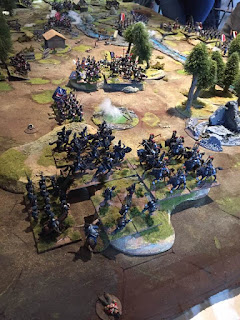 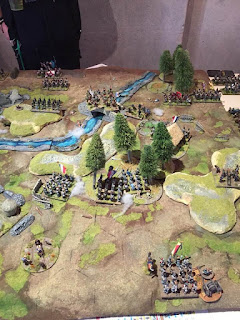 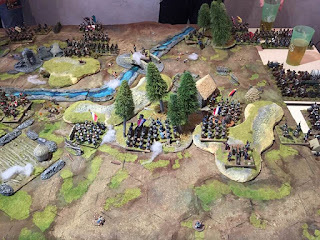