The Internet Archive has opened a new sub-section called The Magazine Rack, which harbours many scans of old magazines, including role-playing and war-gaming magazines (The Dragon, The General, etc.).

Although said 'Magazine Rack' is a real treasure trove for old-school gamers, there isn't much of real interest, alas, for us Gloranthan fanatics.

At the moment, I have found the following of interest:

In The Space Gamer issue 71, p7-9: Converting TFT Characters to T&T. Comments: this is a pretty boring conversion article; it might give you, however, some ideas to be re-used for character generation if you're using my Timinits & Trolls rules.

In The Space Gamer issue 85, p39: The Giant Squid, for RuneQuest. Comments: this can be a fun addition to any marine-based adventure; a kraken is always a welcome surprise!

In The Space Gamer issue 85, p48-50: Gloranthan Metals, for RuneQuest. Comments: this has already been published in various sources, but it is always handy to have this kind of information in one place. Can also be used in conjunction with my previous Rune Identities post.

In The Space Gamer issue 85, p51: The Spy Character Class, for Stormbringer. Comments: this can be easily adapted for a Fonritan game of intrigue and backstabbing.

In The Space Gamer issue 87, p30: Folk Magic, for RuneQuest. Comments: this is a generic article about Folk Magic by Sandy Petersen. The Guidelines therein can be easily adapted to any 'freeform' or 'narrative' style of play. Most useful.
Posted by 賈尼 2 comments:

Email ThisBlogThis!Share to TwitterShare to FacebookShare to Pinterest
Labels: magazine

The kickstarter for deluxe Tunnels & Trolls got backed way beyond expectations (reminds me of the Guide to Glorantha...). Non-D&D grognards may not be prominently visible on the OSR blogosphere, but they are still there, and they deliver!

Below the preliminary art by iconic T&T artist Liz Danforth: 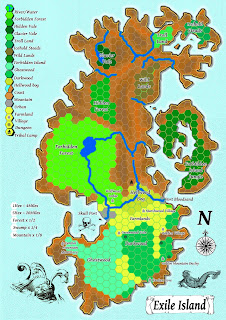 The latest issue (No.15) of Rule One Magazine is out, complete with the third and final instalment of my Gloranthan adaptation of the Tunnels and Trolls rules.

So pick up the free PDF précis of the Tunnels and Trolls rules, download all three parts of my house rules, peruse this blog, and you're ready for countless hours of swords & sorcery enjoyment of old-school adventuring in Glorantha's imperial past!
Posted by 賈尼 No comments:

The painbow is one of the mechamagic items crafted by the Zistorite sect of the God Learners. It looks like a crossbow, except that it does not have a bow string, and its stock is much thicker. The stock contains the magic missiles that are fired by the painbow upon pulling the trigger.

This mechamagical weapon is mostly made of metal, as is the Zistorites' wont. Some models, however, especially in Umathela, make use of hard Pamaltelan wood. The bow is usually plain, but some models, like the one pictured above, may have very ornate bows, which can even be used as hand-to-hand weapons, should the mechamagical mechanism jam, or should the charger be emptied.

Until the demise of the Middle Sea Empire, only the Zistorites and their closest allies used painbows. After the independence of the Umathelan cities and the general loss of power and importance of the God Learner sects, some mechamagical weapons, amongst which the painbow, started to be found outside Gord Learner-related circles, mostly in the possession of wealthy collectors, of Malkioni mercenaries, or of plunderers of God Learner ruins.

The weapon itself is manufactured with a certain amount of charges. Different 'series' of weapons get different starting amounts of charges, so it is difficult to give a general amount. It's usually in the two-figure range. The charges are magical in nature, basically magic missiles that inflict pain rather than physical damage upon hitting the target — hence the name of the weapon. The GM is free to work out the exact effects for his or her system of choice.
Posted by 賈尼 No comments: