Upcoming Book by Chaosium: ‘The Gods of Glorantha’

This piece of news is so important for fans of Glorantha and RuneQuest that I am copying it verbatim from Chaosium’s web-site:

(This is Jeff Richard writing) ‘I just finished the draft manuscript of The Gods of Glorantha, which is about 50 RuneQuest cults done long-style (as was done in Cults of Prax and Cults of Terror).
We’re going to include all the old favourites like Storm Bull, Humakt, Yelmalio, and of course Kyger Litor (albeit fully updated and expanded for the new rules), and cults that feature major overhauls like Orlanth, Ernalda, Maran Gor, Lodril, and Yelm, plus plenty of cults that have never had a long version write-up before (like say Babeester Gor, Dayzatar, Gorgorma, Lokarnos, Odayla, Valind, even the Red Goddess, and plenty of others). This is the culmination of work I first turned to after we finished putting the Guide to Glorantha together, and I finally have a vehicle to get this into print!
The book is done with a strongly God Learner perspective, and provides lots of guidance as to Gloranthan mythology itself. You won’t need anything other than the RuneQuest rules and maybe the Bestiary to use this book (since obviously if you want to make Kyger Litor, Zorak Zoran, or Aldrya worshippers, you’ll probably want stats for dark trolls and elves!). And for grognards, the new information and revelations will definitely make this a must-have.
This is going to be a big book – probably the size of the Call of Cthulhu Keeper Rule Book – and it is going to take time to get the art commissioned on it (and I am sure we’ll be editing and tweaking this for quite some time). But the manuscript now exists— we might even make a few copies of it available at some point in the not so distant future.
And just to be a completionist, I’ve been finishing up the cult descriptions of the Cults of Terror – the updated and revised write-ups of the main gods of Chaos. These cults won’t be included in The Gods of Glorantha, since they are antithetical to most of the gods (although the Red Goddess might disagree), and because they are really not intended as player character cults. But having that done now helps us have resources for the scenario writers.’

As a RQ referee, I do hope we will also be able to have access to the latter cult write-ups!
Posted by 賈尼 No comments:

The Design Mechanism to produce the Lyonesse RPG

I must admit I haven't followed the RuneQuest 6 line much since its rebranding as “Mythras” and its departure from the Gloranthan roots of RuneQuest.

It is unclear at the moment how much the Lyonesse rpg will differ (or not) from Mythras, especially with regards to the magic system(s), but The Design Mechanism will certainly communicate on the various groups dedicated to Mythras on social media (G+, MeWe...)


Posted by 賈尼 No comments: 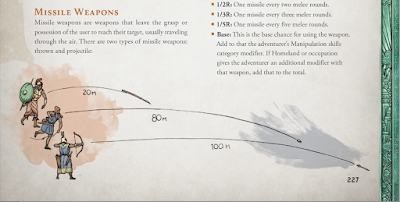