More art is 'leaking' to us backers. This piece is possibly one of the very best Gloranthan art pieces I've ever seen. I usually prefer black & white illustrations but this one just made me go "Whoa!!!!'. 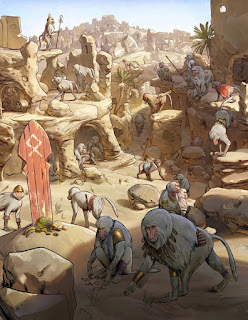 The famed Monkey Ruins in Prax, a holy site for Baboons (who are a sentient species in Glorantha). Excerpt from the Guide to Glorantha:

These are the ruins of the City of the Monkey. When Oakfed fell to earth, he landed on the city, destroying most of the inhabitants. The ruins are the centre of the Praxian cult of Oakfed. Here any shaman can attempt to contact that great spirit with the proper sacrifices. No Oasis Folk live here, and the ruins are sacred to the intelligent baboons of Prax. 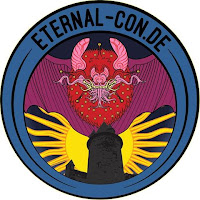 So this is my traditional “Back from Bacharach” post. Honestly I don’t know how useful this post will be for readers of this blog because every year the Eternal Convention becomes more like a gathering of old friends and less like a place where one may gather industry-related news (not that I’d complain...)

Also I crushed my smartphone just before travelling to Bacharach, meaning (almost) no photographs this year.

Came in quite early this year and could catch Jason Durall playtesting the adventure from this year’s Free RPG Day RQ QuickStart booklet for early conventiongoers. The booklet really has everything needed to get you play the new RuneQuest except the chargen rules (it uses pregens): combat, Battle Magic, Rune Magic, skills, passions...
Then I got to chat with Jason about the new RQ and about the latest behind-the-scenes secrets at Chaosium...

This year Charlotte was late so Franziska was our only host. The ceremony was shorter than usual because, as I’ve pointed out, everybody already knows the rules! (and was probably eager to fetch a beer [given the atrocious heat] and catch up with old friends)

Here are my notes:

The 13th Age in Glorantha Sourcebook is at final layout; it contains:

RuneQuest 4: Jason is the lead editor. Still heavily working on editing. Sarah Newton and Lynne Hardy have been brought aboard to help with their external eyes; they are providing lots of feedback.
The first two books are the rulebook and the bestiary. Both should be available for Christmas 2017. Then there is a book of scenarios called the RQ “GM Pack”.
And then obviously this year’s Free RPG Day RQ QuickStart booklet, which has kept everybody very busy.
For those who haven’t followed the latest developments, here is a presentation of RQ4 in a nutshell.
RQ4 is not generic; it is set in Glorantha in 1625.
The rules are an elaboration of the RQ Classic Edition rules, but add:
- Runes, see this post from one year ago, except that the mechanism has been further polished and refined.
- Passions, which also work as augments.
Note: both Runes and Passions work like Skills, with a %age value. Runes are also the basic skills on which Rune Magic depends in terms of succeeding at casting a Rune Magic spell.
- Rune Points, used to fuel the casting of Rune Magic spells. They work like Magic Points except that are replenished during worship ceremonies that take place once a season. How many points you top up also depends on whether your PC is an initiate or a Rune-level character. You do not have to ‘learn’ Rune Magic spells: when you cast a Rune Magic spell, you are channelling your god’s power. I’ll provide an example later on.
- CharGen: characters are much more integrated into the fabric of society; however, there also will be a QuickGen system for people who are in a hurry/do not want to go through the fully-fledged system.
- Shamanism & Spirit combat: completely rewritten (this was arguably the worst part of RQ2) by Chris Klug and Ken Rolston, who have put an emphasis on communicating with spirits rather than fighting them.
- CHA as a characteristic is much more useful and important than it used to be; in particular an 18 CHA is needed to become a Rune Lord.
- Reputation (as a %age), which is different from CHA: it is more like the PC’s renown
- Sorcery. Not the final, fully-fledged rules, but enough to play in Dragon Pass, for NPCs, and for Lhankorings. BTW the Lhankor Mhy cult is the one that has received most tweaks.
- 14 or 15 cults in the core rulebook.
- Culturally, the core rulebook is centred around Dragon Pass/the Holy Country/Prax.
- Non-human characters: none in the core rulebook but rules to create non-human PCs are in the bestiary.
- Alchemy as in RQ2 is mostly gone, replaced with a skill-based system, much more consistent.

Friday ended with drinking beer and eating salty liquorice with Dutch friends. Quite a pleasant combination.

Played HeroQuest auf deutsch, again with Robin Mitra like last year. Exceedingly interesting scenario that started at dawn on Friday, 13 October 1307 when King Philip IV ordered the arrest of the Knights Templar. Our characters were entrusted with one third of the treasure of the Templars which we had to bring to Prester John. Except no fucking body knew where his kingdom was. ‘Nach Osten’. Right. With no idea how to get there. A very challenging scenario, with a very open-ended finale (the group who played the same scenario on Sunday did everything in a completely different way!)

Played Monkey 2nd edition with Dan Barker as the referee. We played the original companions of Tripitaka, and I got to be Monkey himself! A very zany scenario that will probably appear in a free Monkey QuickStart free PDF. Very recommended.

Playtested my historical/civilisational boardgame Siebenbürgen. It is for four players who each represent one of the historical nations vying for supremacy over Transylvania (‘Siebenbürgen’ in German, hence the title): the Hungarians, the Vlachs, the Saxons, and the Szeklers. The game starts at the fall of the Roman Empire and ends at the fall of the Soviet Union. It is a card-driven game, but there is also an actual board (a map of Transylvania and of the surrounding lands) on which the players move the counters representing their peoples and where they may build cities, churches, fortifications, etc.
The game is now almost one year old, and I am very satisfied with how it runs. We played it in about 2.5 hours, which I think is excellent for such a game. Really excited!

Had (again!) a long chat with Jason about the new RQ.

We played the boardgame Mafia de Cuba but were exaggeratedly deep in the roles of the various characters. Great fun... this is what happens when RPGers play boardgames :-)

The traditional Trollball game was held under a cold sun (probably makes sense... Chern Durel, anyone?). This was followed by yet another chat with Jeff & Jason with regards to the new RuneQuest. My Parisian friends and I secured a copy of the manuscript to turn our current RQ2 campaign into an RQ4 playtest campaign!

Playtested the adventure from this year’s Free RPG Day RQ QuickStart booklet with Jason as the referee and a group of RQ grognards as the players. Here are my impressions from an actual gaming session as to what the most salient differences are, compared with RuneQuest Classic Edition:
- Battle Magic does not succeed automatically any longer (you have to roll under POW×5 – not sure I like this)
- Runes, Passions, used as augments (see above). Loved it.
- Rune Magic. Lots of new kewl spells, which depend on your Runes and not your god. Also you do not have to choose which spell you memorise/sacrifice for beforehand since the act of casting a Rune Magic spell is tantamount to your channelling your god’s power. And gods do not memorise spells... In the game, I cast a 3-point Rune spell early on in the adventure, expending my entire capital of Rune points (which I knew I would not be able to replenish). I had to roll under my Truth Rune for success. But I got to choose the spell from a list available to my god; it wasn’t a spell the PC had memorised.
- Magic Skills, and especially Spirit Combat
- Combat: the Defence skill IS GONE (auggggh) replaced with Dodge (nooooooo).
Great refereeing by Jason; we were all completely and hopelessly in the sombre mood of kinstrife, of wergeld, and of the past coming back to haunt the present... That is when I realised that Chaosium hadn’t treated us to new Gloranthan RQ adventures since the RQ Renaissance in the 90s!

Note: I missed the 2nd panel on Saturday; I’m told it was mostly about HeroQuest (and it seems not much is going on at that side...)
The 3rd panel consisted in an open Q&A session. Everybody spoke quickly and in a noisy atmosphere, so I apologise for the incomplete notes.

HEROQUESTING & ILLUMINATION
Q: Tell us more about heroquesting and how that ties with Illumination.
A: Illumination is a mystical epiphany where you realise the nature of All. In a heroquest, you interact with the God Time. The more you deal with the God Time from different perspectives (i.e., you are not always re-enacting the same heroquest) the more likely it is that you get that epiphany.
Think about the famous tale of the blind men each touching a different part of an elephant; the more you touch different parts of the elephant, the more you can understand its true shape.

Q: That’s what the God Learners were doing...
A: The big difference is that the God Learners had an intellectual approach, not a mystical one.
Logic is a very useful tool but it is also very limited when we are talking about things that are beyond comprehension, e.g., eternity.

Q: Is it possible to train someone to be better prepared to Illumination?
A: Yes, it’s exactly what happens in some real-world religions.

Q: What is the definition of a heroquest?
A: It is a procedure to bring back a part of the God Time into our world.

THE EAST
Q: Why doesn’t Godunya do anything against Can Shu?
A: Ignorance is part of the balance of the universe. And at least it’s controlled where it is [in Chern Durel]. If Can Shu were to be crushed, who knows where Ignorance would re-surface... maybe in Kralorela itself?

Q: What is the procedure to find a new emperor?
A: Who knows? There isn’t anybody left around from the last time this happened!

Q: I want to know more about Orathorn.
A: It will be in the 13th Age in Glorantha Sourcebook.

Played ‘Return to Apple Lane’ (probably from the upcoming RQ4 GM Pack) with Jeff as the referee. A fantastic moment of Gloranthan fun, and a surprising twist/follow-up to a beloved adventure. I won’t say more so as not to spoil anybody’s fun when this is out.