The Lascerdans are a mysterious race of sentient reptiles from the ancient past of Glorantha. As with most little-known elder races, information about Lascerdans is scant.

What little information I have managed to scavenge is as follows. Lascerdans inhabited Umathela before and in the Dawn Age, when they were exterminated by the elves of Pamaltela. Lascerdans descended from the pel-mre of the distant, mythical past of Pamaltela, reptilian life created by Pamalt and Balumbasta. That would have made them distant relatives of the Slarges.

Physically, Lascerdans looked like muscular lizard-men with a gaping mouth. One description mentions their having the head of a basiliscus. Although Pamaltelan humans remember them as coming "from the mountains", Lascerdans were at least semi-aquatic, preferring river-bottoms and swamps.

The Lascerdans dammed the rivers to make shallow lakes and swamps, which destroyed forest land, though it did create some mangrove forests. However, the elves of the woods at the time were mostly green elves, and could not survive in mangroves.
The Lascerdans farmed and fed on pens of freshwater manatees (and probably other aquatic livestock), and their infamous slash-and-burn practices were not true slash-and-burn. Rather, the Lascerdans chopped out huge tracts of forest, burnt the wood, and hauled the greenage back to the rivers to use as cheap and fast manatee fodder. They recognised that they got more useful fodder from cleared areas than from the huge tree-covered portions, so they became tree-enemies. That might explain why the elves fought a genocidal war against them. The last Lascerdans were exterminated along the Palau River in 475

It is believed that the Lascerdans worshipped a fire god (a volcano god like the Olodo?), the Mother of Manatees (a herd goddess), and, more importantly, the River Gods of Umathela. They left some mysterious ruins in the forests of Umathela, called Lascerdan Stones.

Canonical sources mention the Lascerdans as being 'extinct' in Second Age Pamaltela but, hey!, my Gloratha varies...
Posted by 賈尼 No comments: 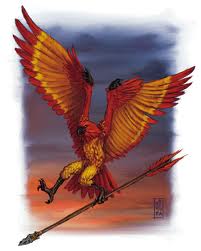 
Edit: The Iqari have both arms and wings, so the picture above does not correspond to how they actually look like.
Posted by 賈尼 No comments:

The following was posted by Loz two days ago:

Here's the progress so far.

Playtesting
Our stalwart playtesting crews have worked they way through character creation, skills, equipment and combat chapters putting each to the test, suggesting revisions, identifying problem areas and highlighting what's worked very well for them. The input has been great and Pete and I spent time during the recent Petecon to address each point and challenge and integrate them, where necessary into the rules fabric.

The above chapters, along with Creatures, are nearing completion and will soon be sent for editing after we've completed some minor additional revisions.

Magic
RQ6 will have five very different magic systems: Folk Magic (Common Magic as was), Animism (spirit magic), Mysticism (brand new), Theism (Divine) and Sorcery. Initial writing is complete on three fifths of these and will form the next round of playtesting.

Folk Magic is a radical revision of old Common/Battle Magic. We've de-emphasised the combat aspects and vastly increased the more utilitarian spells. Old favourites are still there, but every spell has undergone a substantial degree of revision. Mysticism is completely new and aims to allow characters to replicate all manner of wuxia, martial arts, ki, and other powers that focus on self-realisation and potential. Its not a spell-based system, but it does have a very wide range of different effects/talents to offer considerable flexibility. Animism is a complete overhaul of the old spirit magic rules to clarify, expand and explain the system in detail. Theism and Sorcery are next up and these will, again, be overhauled with an eye on flexibility.

Creatures
A huge chapter, there's a wide range of beasties and mythical monsters along with playable races - each with character creation guidelines. Old favourites are in there (but no specifically Gloranthan critters) along with some new additions. We've tried to give each creature or race a unique spin making for more rounded creatures than simply things to butcher and steal from. Expect extensive rules for how creatures react and fight, along with guidelines for creating your own.

Art and Layout
Art is commissioned and we have a team of three very talented artists working on illustrating the book. Having seen some of the sample art, I'm very impressed and once we're in a position to share some of it I'll post samples on the DM website. But work is still underway, so patience please!

We have also commissioned a professional layout guru to work on the book's presentation. Clean, readable and easy on the eye is the overall theme. There'll be no intrusive borders, good use of white space, consistent and recognisable design elements, and a book that should look good in dead tree and PDF versions that remain printer-friendly.

So a lot has been happening and RQ6 has taken several bounds towards realisation. There has been some project slippage due to personal lives and Real Life intrusions, but nothing that has significantly delayed our progress.

Thanks for bearing with us.


Some more information from the Design Mechanism forum:


So, with some of the sting taken out of Folk Magic will another magic system carry the weight of combat-focused spellcraft? Will we see Bladesharp, Speedart, Disruption, Multimissile shifted to another magic system? Or will they remain "Folk Magic" with a more limited effect?


Some of them remain in watered down version. The more potent effects will achieve apotheosis to a higher level of magic. A lot of the problems I saw in long running RQ2/3 campaigns was the out of control magic inflation which eventually rendered weapons and armour superfluous. So we're reining that in a bit.

For those that are worried about Glorantha backwards compatibility we will undoubtedly make a Battle Magic supplement/conversion available for free download.

For some reason I am inspired by Russian fantasy for all things Umathelan. I have found many illustrations and paintings on line. I will give all the links on the blog. 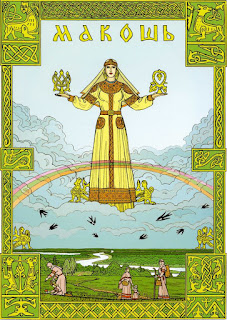 Time-Line of the Campaign

Now leaning towards ca.950ST. The Umathelan Coalition has driven off the Middle Sea Empire but hasn't experienced the utter destruction it will undergo in the 11th century yet.
Rumours of the Closing are reaching Umathela. It's going to be several terrifying years of incoming doom for coastal people who rely on the sea, not helped by the dragonship attacks.

Eastern Umathela is more or less reunited under the leadership of the local God Learners, centred in Cerngorth. Is their leader in the 10th century already called the 'Lord of the World's Knowledge'?

Western Umathela is much more of a very loose coalition of city-states, which don't have any control whatsoever on the interior. And altough a noted Jrusteli scholar has written a book in 950 proving that the elves of Enkloso are extinct, the latter are in reality quietly plotting the Reconquista of Western Umathela.
Posted by 賈尼 No comments:

Email ThisBlogThis!Share to TwitterShare to FacebookShare to Pinterest
Labels: campaign 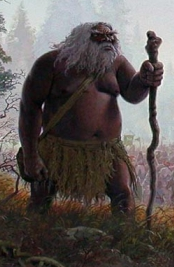 There is little information on the religion of the Old Wayers. They are supposed to practise a mix of theism, shamanism, and even Invisible God worship. Yet some Olodo worshipped the volcano god Aurelion when on Jrustela. Even though it is unknown what happened to those particular Olodo when the Seshnegi settlers arrived, I find it cool to think that some of them where amongst the colonists transported by the Waertagi, and that they have hence had an influence on Pamaltelan Olodo religion, because I want to have at least one active volcano in the interior of Umathela, and I want to use the Olodo as antagonists to the PCs. And I'm sure antagonists with fire magic are going to kick arse.
Posted by 賈尼 No comments: