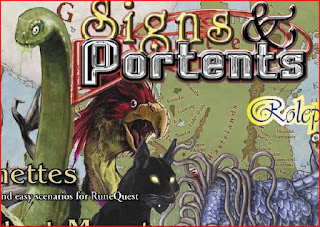 For the whole time that they held the licence to RuneQuest and Second Age Glorantha, Mongoose did quite a good job in terms of the number of RuneQuest- and/or Glorantha-themed articles available in their free on-line gaming magazine, Signs and Portents (aka S&P).

Not only were these articles free, they were also quite enjoyable and useful, especially the ones written by people with a good grasp of all things RuneQuest-ey like Shannon Appelcline, Loz Whitaker, and Pete Nash.

S&P issue 40
Gloranthan Goodies by Bryan Steele (p41-47)
This article presents a host of bizarre Gloranthan items. Some of them are daft, some other interesting, some others yet really well thought out. I am particularly fond of the Imperial Token of the Learned (p42), of the Tome of Secrets (p42), and especially of the Pollen Arrow (p45).

S&P issue 41
Druids by Tim Bancroft (p6-11)
This is a Gateway (non-Gloranthan) article. However, several ideas can be scavenged if you want to play a 'Plant Brother' type of character using the MRQII, Legend or RuneQuest 6 rules.

S&P issue 43
Twenty Gloranthans by Bryan Steele (p5-14)
As implied by its title, this article is an NPC gallery, with a good array of NPCs from various areas of Second Age Glorantha, and with MRQI stats.
NPCs of interest for Pamaltela-centred games are: the God Learner chronicler (No.1), the Malkioni sorcerer (No.2), the Waertagi runaway (No.3), the Tarint Beast Hunter (No.10), and the Arachan investigator (No.18).

S&P issue 51
The Voralans by Shannon Appelcline (p34-40)
Shannon Appelcline is the expert with regards to all things Aldryami, so this article is a must-read if you're interested in the diminutive fungoid pests, and especially if you want to play a Voralan: Voralan skills, Voralan backgrounds, Voralan professions, weapons, cults... A fantastic article, irrespective of your favourite rule-set or 'Age' to play in Glorantha.

S&P issue 63
Plunder of the Elfs by Shannon Appelcline (p29-37)
Shannon Appelcline returns to the delightful 80-ish format of Plunder (a Chaosium supplement for the original RuneQuest) to describe a whole host of Aldryami-destined magic items.

S&P issue 67
RuneQuest Elf Monsters by Shannon Appelcline (p68-77)
This further instalment in the series of Aldryami-centred articles is simply a must. Most creatures can be used in Pamaltela. I particularly like the branchsteed (p69), the snake vine (p75), and obviously the spore cloud (p76) since I'm such a big fan of Slorifings.

S&P issue 87
Tomes of Power by Carl Walmsley (p44-46)
Gateway Stakhanovite Carl Walmsley gives us a list of strange magical tomes. Could well be used to stock a wizard's tower if you're running out of ideas (or traps).

S&P issue 89
Shamanism for Fun and Prophets by Bruce Mason, Gary Goldman and Pete Nash (p14-23)
This very long article is necessary if you want to introduce shamanism to your MRQII game, as the rules in the original MRQII book were not sufficiently developed.

S&P issue 90
The World of Spirits by Bruce Mason, Gary Goldman and Pete Nash (p18-34)
Again, a very long article, and a follow-up to the previous one. All this should really have appeared in the MRQII book in the first place. Indispensable if you plan to run your game using the MRQII rules.

S&P issue 91
Wondrous Woods by Carl Walmsley (p44-46)
In this issue, Stakhanovite Carl Walmsley gives us a list of plant-monsters. Not all of them are inspiring or particularly fitting in the context of Second Age Glorantha, but they can be used as impediments to the PCs' travels through any Umathelan forest.

S&P issue 92
Devil's Gulch by Bruce Mason and Dyson Logos (p66-73)
This is a short but deadly adventure set in an unpsecified wilderness location. [SPOILERS] The adventure features lots of Chaotic opponents. Since Chaos isn't strong in the Second Age, I wouldn't particularly recommend this adventure for a campaign set in Second Age Glorantha. However, if you fancy the idea that the abandoned temple has been used as a laboratory by some crazy (and now dead) God Learner, who has somehow attracted all these Chaotic creatures, you may give it a try.
Posted by 賈尼