A Malki City after the Closing 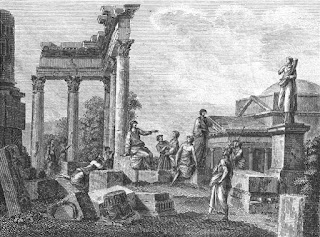 (Travelling to the city itself amidst the encroaching forest:)

A chill wind blew from the highest peaks, inspiring evil, and making a dismal rustle amongst the woods of chestnut that hung on the mountain’s side, through which we were forced to pass. I never heard such fatal murmurs; nor felt myself so gloomily.  I walked out of the sound of the carriage, where the glimmering moonlight prevailed, and began interpreting the language of the leaves, not greatly to my own advantage or that of any being in the universe. I was no prophet of good, but full of melancholy bodings, and something that bordered upon despair.

It was midnight before we emerged from the dark forest, and saw faintly before us the huts of the hamlet where we were to sleep. At our approach, two hags stalked forth with lanterns and invited us with a grin, which I shall always remember, to a dish of mustard and crow’s gizzards, a dish I was more than half afraid of tasting, lest it should change me to some bird of darkness, condemned to mope eternally on the black rafters of the cottage.

(Within the city itself:)

Nothing can be more sequestered or obscure than its situation. It had rather a deserted appearance; several of its houses being destitute of inhabitants, and crumbling into ruins. Two or three of them, however, exhibited ancient towers, richly mantled with ivy, and surrounded with cypress, that retained the air of having once belonged to persons of consideration.

We perceived among the grass an oblong basin, incrusted with pure white marble. Most of the slabs are large and perfect, and still retain their polished smoothness. The pipes to convey the waters are still discernible; in short, the whole ground-plan may be easily traced. Nothing more remains: the pillars and arcades are fallen, and one or two pedestals alone vouch for their former existence. Near the principal bath, we remarked the platforms of several circular apartments, paved with mosaic, in a neat simple taste, far from inelegant. Weeds have not yet sprung up amongst the crevices; and the universal freshness of the ruin shows that it has not been long exposed.


Stolen from Dreams, Waking Thoughts, and Incidents by William Beckford
Posted by 賈尼