A Nordic-Themed Setting for MRQII 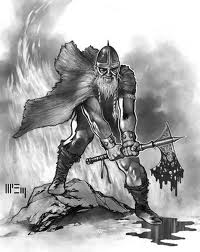 The fine Italian-language blog la Cripta del conte has made available a free Nordic-themed campaign setting, simply titled il Nord (the North), for the Italian version of RuneQuest, which corresponds to the translation of MRQII. As such, it is also highly compatible with RuneQuest 6, and should be easily adaptable to Mythic Iceland.

The setting, as already noted, is an imaginary Nordic-themed continent, which is protected from menacing giants by a huge Tree of Life that grows in its centre. Yet it is not your vanilla good guys-vs-bad guys setting: the interesting twist is that the "good guys" (the inhabitants of the continent who are, presumably, the people of the PCs) are themselves descended from ship-borne invaders who massacred the original, shamanistic inhabitants of the place.

The PDF file is only 15 pages long, yet it manages to offer pretty much everything that is needed for playing in a Nordic milieu within the MRQII framework: languages, currencies, calendar, character backgrounds (cultures & professions), lists of equipment, cults.

The setting could even be ported to Glorantha to be used in Valind, in Ygg's Isles, or in a similar cold milieu.
Posted by 賈尼