“Delusions are lies that tell the truth” 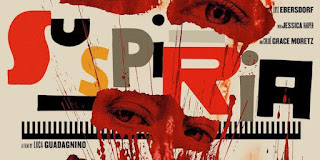 I went to see Luca Guadagnino’s 2018 film Suspiria* and had my mind blown away. So rich, so intense, and it resonated with many of my own fantasies and fears.

Suspiria is actually more like cosmic horror à la Lovecraft. Sara’s character, for instance, is a lot like most protagonists in Lovecraft short stories: they deny the evidence of bad shit happening until it’s too late.

And, just like Lovecraft short stories were deeply ingrained in their time, Guadagnino has managed to perfectly fit Suspiria in the mood of 1970s Europe, at a time when the wounds of WWII hadn’t healed yet, and European youth was rebelling.

The above doesn’t mean that Suspiria is a Lovecraftian film though. It is not. Lovecraft did not understand (and probably feared) women and female sexuality. Suspiria’s cast is 100% female** and the plot revolves around [mild spoiler] the fact that a foremost, all-female dance institute in Berlin is actually a coven of witches; the pupils live at the school and there are innuendos about Sapphic love.

For me, Suspiria is a film that explores a part of our psyche and culture that is usually overlooked in our patriarchal society: the role and place of womanhood, of female sexuality, of the three visages of Woman: the virgin, the mother, the crone. And just like “kung-fu” movies celebrate the male body, Suspiria, with its breath-taking dance scenes, celebrates the female body.

So what’s in there for the RPG buff?

The obvious answer is, inspiration for a contemporary horror RPG***. This is so obvious that I won’t expand. Depending on the maturity of your players you may emphasise the female sexuality aspect, or the political one, neither, or both.

Gloranthan fans will find food for thought aplenty:
a) First, the whole film is a great illustration of why the Dance skill is actually super useful. And, based upon the already-classic “Olga scene”, you could even devise a whole magic system based upon dancing moves. Think of the implications for matriarchal societies… How cool is that?
b) There’s also quite a lot to be salvaged in terms of dreams, how they are suggested to one’s victim, how they influence reality, etc. Great stuff for a game set in Eastern Genertela.
c) And, last but not least, there’s also a profound reflection on illusions. “Delusions are lies that tell the truth” is a phrase the Doctor says. I can see implications on Eurmali hero quests.

If Suspiria is not a horror film, it certainly is a weird one, as in: weird as a genre. So if you like Lamentations of the Flame Princess, you will find tons of gameable ideas in this film. I reckon you could actually transpose the whole film to the same milieu as Better Than Any Man, as a sister or alternate adventure, the coven of witches being allies or nemeses of the ones in Jim Raggi’s adventure.


* Luca Guadagnino says his film is not a remake of the classic 1977 giallo, but a re-telling.
** Even the only male protagonist of the film, the Doctor, is played by a female actress with prosthetics, Tilda Swinton
*** Because horror RPGs are not the same “horror” as horror films.
Posted by 賈尼