Yet Another Excerpt from our Ongoing RQ:G Campaign

This is several sessions after Hervé’s session report from 15 June. Again, he liked the session so much he produced a write-up. Enjoy! 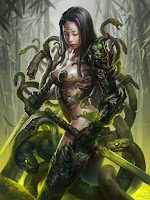 *Spolite sorcery at its best: a 12-point Drain Soul spell, with full augments applying to the POW vs POW roll against the blue spirit. It worked and it lost 13 magic points, driving it out of Xu and attacking the sorcerer instead. Now this was effective exorcism!
**immediately gaining a “Loyalty (Can Ta)” at 70%
***each of us had a Runic rating between 65 and 95% (depending on their success during the ceremony), and 6 Rune points
****my first Sunspear in 30 years of Glorantha gaming! It did 13 points damage (4d6) to both of them
***** using Darksense, Rune points for Find Gold, etc.
NOTE: all participating characters got +6% to their Reputation, a POW check, +15% to a single skill used in the Quest and normal skill checks.
Posted by 賈尼