Back from The Eternal Con

The Eternal Con takes place every year round about Pentecost in Burg Stahleck, a castle-turned-youth hostel overlooking the Rhine. We've had a nice surprise upon arriving there: the castle has been refurbished! All clean, lots of new furniture, new decoration, new windows.


The Eternal Con — this was the 6th edition — has become so dense in events (we even had academic events this year, see below) that, just like last year, I will only concentrate on the ones I managed to attend.

After the usual check-in, emotional meeting with old friends and exaggeratedly early German dinner, we took part in the traditional Grand Opening ceremony. Despite some initial blunders, it was better than the previous years. Franziska and Charlotte were our delicious hosts and entertained us with their witty humour and — this was a novelty this year — very funny shorts that were projected on a big screen and which explained the 'rules' of the con and of the Jugendherberge in an easy to understand way. It was the very first time the con went digital!

FRIDAY 22 MAY, 20:00, Presentation of the German version of HeroQuest

Robin Mitra of Humakt eV gave a presentation (auf deutsch) of what HeroQuest was, how it was different from other role-playing games, and why people should buy it. Unfortunately, no physical copy of the German version of HeroQuest was available yet ☹

The hottest piece of news:
King of Sartar (hardback, first in a new line of 'fiction', see below) is at the printer!
It will be followed shortly by HeroQuest Glorantha.
It'll probably take some time to ship them.

What comes next?
The Coming Storm (a huge Sartarite sandbox-cum-campaign covering 1618-25) by Ian Cooper is SO big it'll be published in two volumes. Moon Design will try and make them available as soon as possible (i.e., in 2015 — the first volume will hopefully be available in time for Gen Con).

Also for Gen Con: the first three chapters of Prince of Sartar out as a kind of trade paperback comic book.

Volume 2 of The Coming Storm will hopefully be out in time for Essen, where Moon Design want to have a greater presence.

Sandy Petersen's mammoth boardgame, The Gods' War, will be Kickstarted at the end of 2015/beginning of 2016. At the time, they are all super busy working on the miniatures for the game.

In the pipeline:
- TrollPak vol 1 (of 3!) by Dan McCluskey - all about Trolls
- Big Rubble
- 13th Age in Glorantha ~ aiming at the end of the year. This will be in 2 volumes: a rulebook, and a generic source book set in 1627, heavily focused on Gloranthan myths.
- Gods of Glorantha - this will be Kickstarted so as to have fantastic art in it.
- Riders of the Storm - Nomads of the Wastelands (formerly known as PraxPak), a supplement about the Praxian Nomads and Genertelan shamanism, by David Scott

You may have noticed that Moon Design are much more active than in the past. Their new target is 4-6 books a year. They're also looking at having older products available via Lulu.

What comes later? What are their projects for the future?
- TrollPak vol2: Uz characters
- TrollPak vol3: a big campaign for Uz characters set in the Redstone Caverns
- A campaign pack with six scenarios set in the six parts of the Holy Country; at the moment, tentatively containing:
Casino Town
New Crystal City
Sacking the City of Wonders
...
- A city guide for Nochet with a map as detailed as New Pavis'
- A Pyre for Gods and Heroes - a novel by Jeff Richard based on Greg Stafford's Harmast Saga. The idea is to have a 'fiction' line, with one book out per year.

Rabbit Hat Games' very own MOB was in from Australia and presented us his card game UNFamy. It was hilarious, especially since the losers had to eat a piece of Vegemite-flavoured chocolate bar.

We prepared our HeroQuest characters for Hervé Carteau's Harreksaga in the afternoon using a nice questionnaire. I really love this character generation method.

This is one of the academic events mentioned above. Dr Christine Reich presented us the latest findings in the field of Bronze Age religion. As incredible as it may seem, despite the lack of written records, and without many new findings, scholars such as Christine are still able to find new facts about Bronze Age religion by comparing findings, by analysing the way they were buried and the area they were buried in, by comparing pieces from different museums and trying to find common patterns... A very informative and mesmerising conference!

This was actually but an episode from the Harreksaga, a series of interconnected adventures inspired by Harrek's saga in Glorantha. This was started by Lawrence Whitaker a few years ago, and has then been continued by Hervé Carteau. The present episode was set in Tarahorn and in the Inland Sea against the evil Kareeshtan empire. The emotional high point of the adventure was at the Oenriko Rocks, where the Vadeli and the Kareeshtan had fought a naval battle 30 years ago. The bottom of the archipelago there is full of dead drowned sailors.  At the top of the largest rock, a coven of 17 Kareeshtan socerers were enacting a necromantic ritual... We plunged underwater and ended up fighting 17 Kareeshtan liches who were protecting the underwater cemetery whence the undead sailors were about to be summoned!

While we were playing our game, we could get glimpses of an ongoing Asterix freeform mostly aimed at kids.

After all these years attending the Eternal Con, I played in my very first game of Pendragon, which was set... in a castle above the Rhine! It was a quite mysterious adventure with its faire share of false leads. Kudos to Louis Kolkman for keeping a straight face whilst we spurted out the craziest theories for the strange behaviour of the Baron. Siegfried and Etzel were also in. As one of the players said, "A Pendragon dungeon crawl?!"

The traditional Trollball game. It was VERY wet, even at some distance from the field. 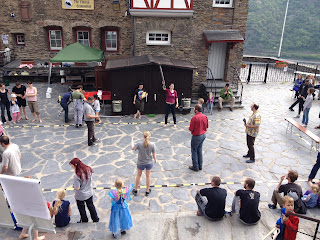 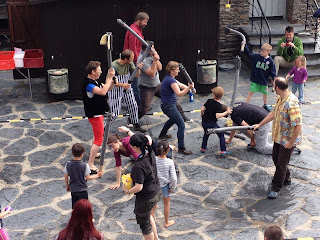 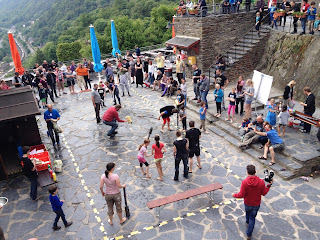 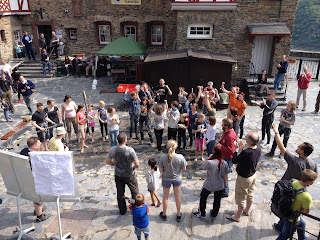 Watched as some friends were playing the Mystic Wood (1980). Nice little exploration game. 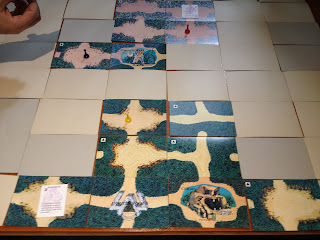 Yours truly GM'ed Into the Gloranthan Odd.

This was the blurb that I had posted to advertise my game:

The Guide to Glorantha says: "The [evil ruins of the Machine City] sit atop a high cliff by the sea, and no matter what the tide may be, there are waves which still reach hungrily up the cliff face far above the sea level, aching to destroy once again. The trolls left a cursing shadow which slowly rolls over the ground, even at full noon. The dwarves left fiendish traps for the overly curious. Now, even approach to the site is forbidden by the local rulers."

Somehow your party has managed to pass through the local guards and to avoid the Mostali traps. You start your descent into the mysterious ruins of the God Learner city...


Into the Gloranthan Odd is my Gloranthicised version of Odd Dungeons by Éric Nieudan, which itself is a hack to render more mediaeval the very, er, odd late modern role-playing game Into the Odd by Chris McDowall.

A super fast "build your own civilisation" game. Perfect as a filler.

Gods' War well underway, Kickstarter later this year. Now working on the miniatures that go with the boardgame. 3D is a big challenge, compared with 2D.
Realised there was no "in-Gloranthan" depiction of Gloranthan gods.
The 'illumination' picture in HeroQuest Glorantha is one of Moon Design's first conscious attempts. 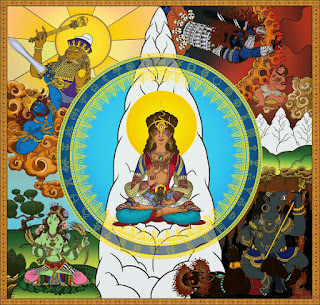 New, improved prosopaedia. The draft is being used a lot internally as source material. This will be the basis for Gods of Glorantha.
Lots of new gods, esp. in Fonrit. (Followed by a lengthy discussion about Chaos in Pamaltela, and how everybody's used it, the Fonritians, the Artmali, the Vadeli). Followed by a short history of the Artmali and their fleets (used Mastakos' powers).

Q: difference between sorcery and veneration?
A: Sorcery uses the laws of the universe to bend reality.
Veneration is simply when you recognise the importance of ascended masters.

Side remark: ancestor worship is actually probably the most prevalent worship in Genertela. It's just not mentioned much in the rule books because they are... gaming books, and not anthropological treatises about a make believe place!
By the way ancestor worship would be better represented by the Man rune than by the Spirit rune.

Q: how many [core] runes are there?
A: around 30 to 40
Minor runes (e.g. the Yinkin rune) are not really "runes" as classified by the God Learners.

So sad. Too sad. See you next year, everyone!

Uh oh. This was definitely not like the one at the Kraken last year. Too many people, some of them quite besoffen. Ah, well.
Posted by 賈尼