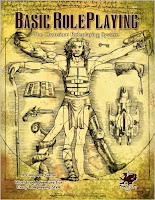 The Basic Role-Playing System, the common ‘engine’ at the heart of most Chaosium role-playing games, has at last its own System Reference Document (SRD) and its very own Open Gaming Licence (OGL), different from that “other” open gaming licence.

The Chaosium web-site provides a lengthy explanation of what is allowed and what is prohibited via the BRP OGL. The SRD itself may be downloaded as a PDF from here.

I hope these new tools will spur game designers to create BRP-compatible role-playing games and adventures!
Posted by 賈尼