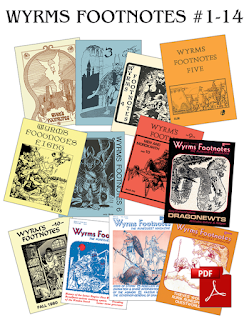 Chaosium has made the old issues (No.1 to No.14) of Wyrms Footnotes available as cleanly OCR'd PDF files on their web-site. Issues may be individually purchased at USD 2.49, but the whole fourteen-issue bundle is available at USD 24.99. BUY 'EM; this is a fantastic set of boardgame and TTRPG history, and Greg Stafford's editorials give great insight as to how a gaming company was run during the golden age of our hobby — these fourteen issues cover the 1976-1982 period of time.

I have started reading them, and there are lots of nuggets of weird knowledge and exciting announcements of supplements that never were. Some of my comments appear in this thread.

In issue No.5, from summer 1978 (just after RuneQuest got released), there is the very first tentative list of RQ supplements:

RUNEQUEST SP SERIES
SCENARIO PACKS, numbered, by several various authors. Scenario Packs are mini-dungeons or short overland treks. They include appropriate maps, monster stats, treasure stats, and everything required to run an expedition of one to more nights.
#1, Kakston's Art Museum, by Warren James is for all beginning characters with no more experience than they might roll up on the Past Experience charts. Only $2.
#2, Balastor's Barracks, by Steve Henderson is tougher, requiring a party to have gained some skill at arms, and a few spells as well. Only $2.
#3, 4, and so on are also in the works, and will sell for various prices.
Both of these are Definite.


LOL... “Both of these are Definite”. Although Balastor's Barracks was eventually published as SP1, I have never ever heard anything about Kakston's Art Museum, not even as a draft publication.
Posted by 賈尼