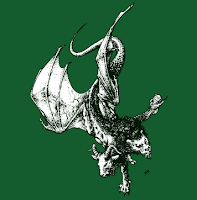 Back from the first con in ‘con season’!  This year’s Chimériades took place in the same wonderful village in the Luberon as the two previous incarnations.

As usual, here is my feedback for the poor souls who had other priorities in life than travelling to a wonderful château in a seraphic location to enjoy role-playing under the Provençal sun. [Important notice: since I’ve had an appalling H1 2016 at my day job, I am in fuсkwit mode at the moment, so: no GMing at my side at the Chimériades (nor will I GM at the Eternal Con in Bacharach), and I must also disclose that I have stolen from various friends’ con summaries to complete mine.]

Chimériades aren’t particularly known for their being a ‘dry’ convention, but the organisers have overachieved this year… after the inaugural ceremony, several tables of fresh mojitos were expecting us in the courtyard of the castle. Also by the end of the con, we hadn’t run out of beer kegs (contrary to what happened in 2014…)!


Another big subsistence-related surprise: this year the food was prepared by a professional caterer! We had fantastic paella cooked in huge frying pans just in front of the château. So most of us started the three-day playathon sipping a fresh mojito in the mouthwatering smell of frying capsicums. I’ve definitely experienced worse at a con.

THURSDAY 5 MAY, late at night

I had obviously signed up for Jeff Richard’s very first worldwide open playtest of the new RuneQuest rules! First significant surprise: you are encouraged to play a party of characters from a similar background, and the [quite long] character generation is not dissimilar from the Sartar clan generator in HeroQuest, except that each character is similarly created via a long questionnaire, and not the clan or the character party itself. As a result, and since there were five of us, this took almost two hours, at which point we decided to play the actual scenario the following day in the early morning. Second surprise; the rules are really, really close to RQ2, even more so than what Jeff had hinted at on G+. To me, it looks like Chaosium’s two guiding principles in this endeavour have mainly been “remove unnecessary rules” and “if it ain’t broke, don’t fix it”; I am happy with 99.9% of the results… I only miss the Defence skill, but since apparently I am the only such person on Earth, it shouldn’t be an issue for most of the fans.

OK, so were all from the same ‘Old Tarshite’ village on the slopes of Kero Fin, and Jeff demonstrated that you could play an intense hero quest even with beginning characters. We all had the opportunity for mucho roleplaying and we got to try out all the new skill combinations, augments, etc. All I will say here (since RQ4 definitely warrants its own dedicated blog post) is that the new system works flawlessly, that there aren’t any maths involved (augments are flat ±20%, not percentages of percentages), and that rune magic ROCKS. These first impressions still have to be confirmed, of course, since I’ve only played a mere one-shot, but as much as I enjoyed the short-lived RuneQuest Adventures in Glorantha supplement for RQ6, I have had the impression at Chimériades that we had found –at last!– the holy grail of Gloranthan old school role-playing!

The first panel of many that were available (and of which I only attended two) was the Gloranthan Seminar with Jeff Richard and Ken Rolston.

As usual, the first questions were about upcoming products— so:

The Coming Storm is at the printer. The first book is expected in time for Gen Con. The second book is at layout, and is scheduled for the end of the year.

13th Age in Glorantha (13G) is at its final review stage. Currently at 400+ pages. Scheduled for the end of the year. As Jeff goes through the edits of 13G, he adds relevant stuff here and there to the 1627 sourcebook to make sure everything mentioned in 13G gets properly covered in the sourcebook, which BTW is a myth book; the model for the sourcebook is the myths articles in Wyrms Footnotes. The sourcebook will be useful for all Gloranthan-based role-playing games and not only for 13G, since all Gloranthan RPGs now heavily revolve around hero questing – and hence myths.

New RuneQuest core rules. Public playtesting in the next few weeks. Missing sections: hero quests, new sorcery [note that there won’t be any Malkioni in the core rules, only Grey Sages will have a few sorcery spells]. The full manuscript is scheduled for Gen Con. The new rules are designed to be backwards compatible with all the reprinted RQ2 products, which are going to be back in publication and printing.

Six Ages (successor to King of Dragon Pass): finished writing, missing the art. Looking at end of 2016/beginning of 2017. Set in Glorantha, but not in Dragon Pass [yours truly suspects Esrolia].

Gods War is being kickstarted this summer, by Petersen Games and Moon Design.

Wyrms Footnotes issue 16 will gather RQ material that won’t have made it in the published book.

Once the rules books are out, supplements will have to be rolled out… An “Esrolia Pack” is in the works (the published Nochet map was the first step).

The new Dragon Pass boardgame by Chris Klug is currently being playtested. It is designed to be played in 90 minutes. The aim is to kickstart it at the end of 2016.

Trollball proof-of-concept boardgame using miniatures from Petersen Games. A few pictures were posted on G+. No schedule at the moment.

Jeff and Ken also mentioned that Glorantha should not be seen as a “scholarly” world any longer: GMs now have the Guide at their disposal, and beginning players should have enough understanding of their starting locale thanks to the character generation process in RQ4.

Rightly expecting not to be in great shape for Chimériades, I hadn’t booked anything for the Friday afternoon slot. I have thus been able to leisurely walk through the castle and its gardens to see the various RPG tables, and more.


Stéphane Gallay was playtesting Gingerbread (working title), his new RPG in which the players are students in a super-hero academy. Readers of a well-known French graphic novel will feel at home. I didn’t play, just watched, but the system seemed quite reminiscent of Hero Wars.

I’ve also enjoyed listening to my friends playing Grégory Privat’s Bimbo RPG. I love how the game “forces” the players to be creative both in how they describe their character’s actions and in how they have to talk in-character.


I have drooled at length in front of a copy of Cthulhu Wars painstakingly painted by Grégory Privat that you could win thanks to the lottery (alas, I didn’t).

There were nice Gloranthan decorations everywhere in the castle, this year being the 50th anniversary of Glorantha (but more on this later), including some unpublished illustrations! 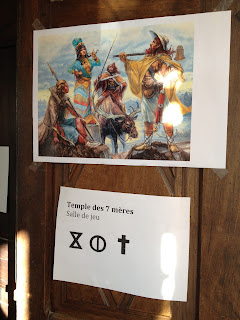 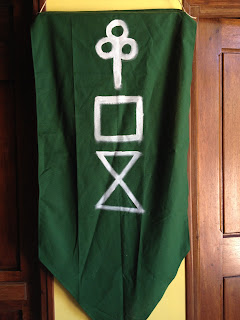 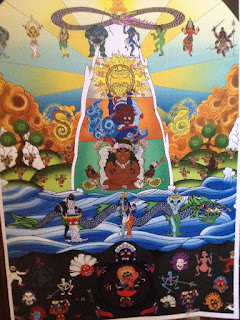 
Also the usual publishers’ and resellers’ booths, etc. Other friends playing, and various games being demo'ed. 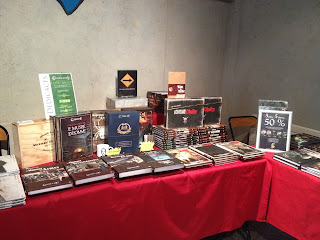 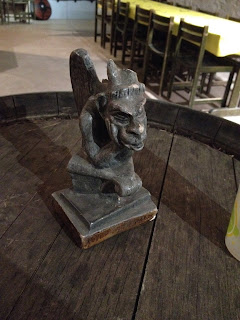 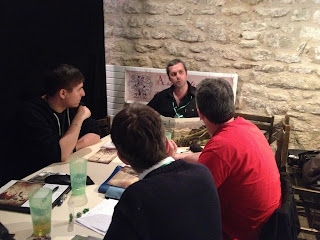 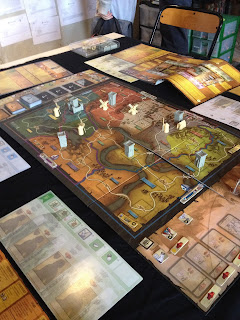 Another piece of epic Gloranthan gaming! Early in the year, Éric Vanel had adapted the BattleLore rules to Glorantha for an in-campaign battle that we played during the course of his HQ campaign. Since we all loved how the game had played out, he decided to use those same rules to render the battle of Dangerford (from the Coming Storm) as a standalone wargame.

I acted as the co-referee. We had 5 players on the Lunar side, 4 representing the Sartarite rebels. The game played really well, the only problem was that the players who had received the rear-guard counters didn’t get to play much. Also, the Sartarite units exaggeratedly benefited from a scaling error on the map that made the Creek much wider than it really is, hence decreasing the efficiency of the Lunar units that use ranged weapons and/or magic. Hopefully a version 2 (for THE KRAKEN?) will fix these small shortcomings because except for these the game was fantastic.

This had been advertised more as a workshop than a panel, so I had assumed we would be creating stuff with Ken Rolston. We ended up mostly listening to Ken talk about CRPGs –which I hate– but him being the Rune Czar it was still very interesting.

Ken globally talked about failed games, how he pitched them to bigwigs, what they could have been… The one that caught my attention most was ‘Exile’, a mix of Civilization and Oblivion, and ‘Markland’, pitched as Sartarites settle the New World, or Elves and Dwarves settle a post-Hobbit Desolation of Smaug. I also remember this particular sentence: “Managing artistic people is like herding cats”.

The usual perk at these cons is that you get to play with the very authors of the games, and so I managed to secure a place at Camille Guirou’s The Cardinal's Blades table to enjoy her adventure le Serpentaire (the word means both ‘Secretary Bird’ and ‘Ophiuchus’ in French, and both meanings played an important role in the scenario…). It was really one of the most enjoyable adventures I’ve ever played, with a breathtaking in medias res opening, great locations (Provence in the 17th century), and possibly the best NPC I’ve ever been confronted to. Loved it!


While I was enjoying Camille’s game, some other lucky friends were playing Scions of Ralzakark with Ken Rolston. This was a scenario Ken had already GM’d at THE KRAKEN… Can you believe I missed it twice?!

SATURDAY 7 MAY, late afternoon and night

Alas, alas, even the best cons get to an end, and we had a moving closing ceremony, during which Philippe confirmed there would be another con in 2018.

After the traditional barbecue dinner (yes there were vegetarian patties) the organisers had a big surprise for us Gloranthan fans: a score tartes du Luberon with Gloranthan runes on them! This is part of what makes the Chimériades so special. 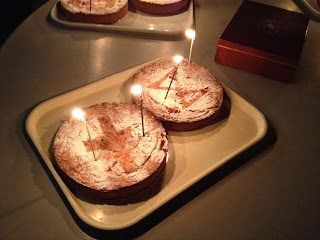 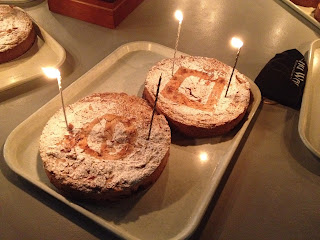 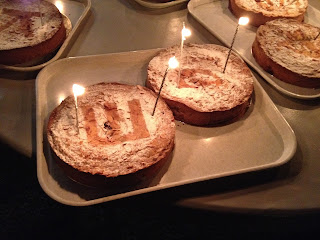 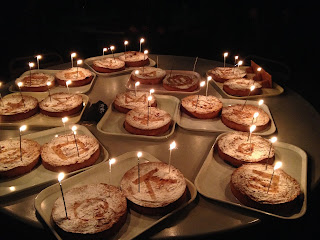 
The ugly pictures (unmarked or marked *) are by tours truly.
The beautiful pictures (marked †) are by Stéphane Gallay, under a creative commons licence.