I would've never believed that I'd write this, but two cons in a row, well— that's pretty exhausting! After having spent a few days in the Luberon, back to work for a few days, and then off to the Eternal Con (7th edition!) in Bacharach on the left bank of the Rhine.

Now, the Eternal Con has always been a "family-friendly" con, but I had the impression, this year, that it was really, really more diverse than usual in terms of gender and age. We had lots of families, lots of kids (more than 25!). Lots of new babies this year too! And many events. As a result, I will only concentrate on the ones I managed to attend.

This was held, as usual, on Friday night. Just like last year, Franziska and Charlotte were our hosts and entertained us with their witty humour and a faux Who Wants to Be a Millionaire? quiz show that featured RPG-related questions. It was really all good-hearted and very funny, much like a reunion of old friends. I think at one time the organisers asked "who is here for the first time" and only two people raised their hand! 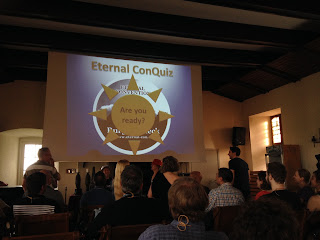 Jeff gave us pretty much the same information as at Chimériades, so please refer to my Chimériades report here.
I'll concentrate on the extra details that we didn't get at Chimériades in this blog post. Jeff said, for instance, that the mammoth Gods War boardgame will be cheaper than Cthulhu Wars even though the miniatures are more awesome.
With regard to RuneQuest Classic: the books will be carried by game shops (yay!).
RuneQuest 4 (lots of extra news):

Modiphius got the Conan licence two years ago. At the time, Jason Durall was working (with Modiphius) on the Achtung! Cthulhu: Assault on the Mountains of Madness campaign pack. Modiphius asked Jason to work on the new Conan RPG as the line developer, and Jason, who has been a huge Conan fan since he was 9 years old, enthusiastically accepted.

There have been lots of Conan RPGs in the past... So why a new one? Here are the design pillars of the new game, which Jason thinks make it stand out of the RPG crowd:

1- Inspiration.
a- The source material is pure Robert E. Howard, no pastiche, no movies; e.g., all the characters' names, locations, etc. were double-checked by REH scholars. Hence the exact name of the game: Robert E Howard's Conan.
b- It has been decided that the stories set in the same world as Conan but without Conan are canon source material. Even other REH works like the Kull or the Lovecraftian stories are!
c- Time-frame of the core RPG: about the time Conan 'enters the stage' (he's about 17 years old). The setting of the core book is centred on Cimmeria and the surrounding countries (Aquilonia, Hyperborea), and hence focuses on clan warfare, border skirmishes...
Later sourcebooks will cover later eras and more southerly areas (e.g., Zamora), thereby introducing different flavours of setting: the Zamora book is thief-oriented. A later book will focus on being a sea pirate. I think that's pretty clever.

2- The system will be strongly pulp-oriented. The idea is that the characters start heroic; rather than become more powerful with experience, they get more diverse powers.

3- The setting will feature exotic places, strange technology, mysterious ruins... all the ingredients of the sword and sorcery subgenre, of which REH is regarded as the father.

In parallel to the source books, there will be an adventures book, a magics book, a cults book. Jason said they were looking at something like 18 books, already funded by the kickstarter. Additional standalone adventure will be available as PDFs.

The System is called 'the 2d20 system'. You basically roll 2d20 and use the best one... sort of like the advantages system of other games, except it is always on! Skills give you extra dice, and you may trade automatic successes for "doom points" to the GM.

We started as a ragtag mix of adventurers and Aquilonian soldiers in the Bossonian Marches, between the Black River and the Thunder River. I was playing Maeve, the Talented Archer (a kind of female Conan, really).

We only used d20s and d6s to play. The rules are heavily combat-oriented, with lots of "visual" manoeuvres that directly translate into dice-related effects (re-roll, add 1 die, etc.); it's fun and easy to learn, way simpler than RuneQuest 6 or Revolution D100. Not much else to add on the 2d20 system part... It really works well for combat! (and I'm the guy who's usually bored during combats), I would say slightly less so for non-combat skills. I only have two pieces of criticism with regard to the game mechanics: (a) We dispatched our opponents too easily, even the big fat sorcerer at the end of the adventure, and (b) You usually lose no vigour/health points during combat until a given threshold where all of a sudden you lose a lot of them!
Anyway, the system is still being refined. Note: Apparently the 2d20 system hasn't been created ex nihilo for the Conan RPG but it is a reworking of an early, already-existing system (from the free Drifting Through Space RPG – also by Modiphius).

There was a seminar presenting the German-language version of RuneQuest 6. I missed it. 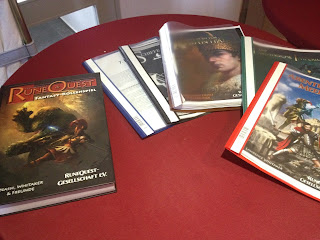 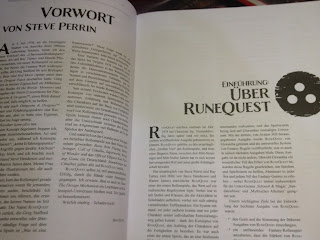 While I was playing Conan, some people out there were having fun in a  Glorathan freeform!


After the freeform, some of my friends played RuneQuest 6 in German while I went for...

This was run by Robin Mitra himself, who translated HeroQuest in German, and it was in German! The game started with a lengthy clan generation questionnaire à la Sartar: Kingdom of Heroes. It was very funny and helped me get into the game (not that I don't know Sengoku Japan — it's just that I'm not used to playing in German).
The clan generation questionnaire and the adventure itself were full of cultural detail, and devoid of the usual anachronisms one finds in faux Japanese RPGs. Kudos to Robin. When one thinks that this was not a fully-fledged Japanese HQ setting, but a mere adventure from a book collecting 15 different adventures for HeroQuest... I wish it were translated to English!

This was the traditional Trollball game in the court of the castle. I missed it because I was playing downstairs in the castle. 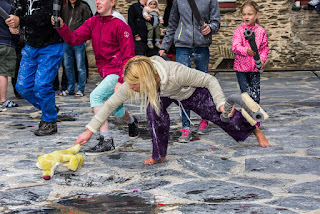 Simon Phipp, he of the acclaimed Merrie England RPG, demonstrated the brand new Revolution D100 rules. We had a very refreshing adventure set in 12th century England with much intrigue and little combat.

SUNDAY 15 MAY, afternoon, 1714: The Case of the Catalans boardgame

I had already noticed this game on the Saturday, but unfortunately couldn't play it. I managed to play on Sunday though, even if it was in the three-player version.

My, what a fantastic card-driven wargame~boardgame! There are so many cool ideas in it:

1) All the players are allied against the French (whose actions are driven by some of the cards) yet you're obviously vying against your "allies" to win — without being allowed to attack them. Intrigue, manoeuvring, and especially resources (whose significance I figured out way too late into the game) are of paramount importance if you want to win.

2) There are two possible outcomes: the French "win" (by taking Barcelona) or they "lose" (by losing too many troops); depending on the outcome, the victory conditions are different. So depending on what kind of victory points you amassed you are going to try and favour one outcome rather than the other. And you will never know, until the very end, how your VPs are going to be computed!

3) Each country has a 'Will to Fight' gauge. The more goals you reach, the more your Will to Fight decreases... and under a given threshold you're not allowed to recruit and to move armies any longer!

Anyway, this was probably the game I preferred during the whole con. I can't believe I'd never heard of it. 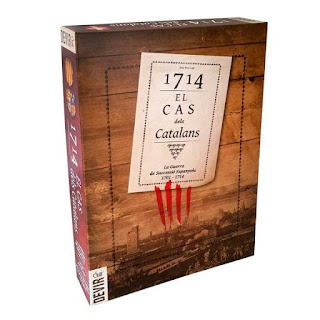 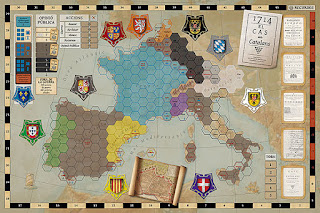 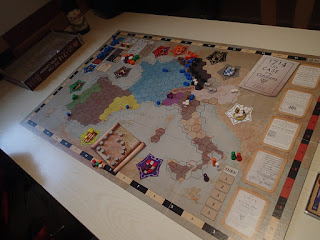 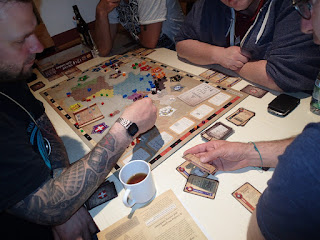 SUNDAY 15 MAY, 19:00, Chaosium seminar with Jeff (as creative director)

Since there had already been a Gloranthan seminar, this one concentrated on Chaosium's other products, mostly Call of Cthulhu 7th edition.

Jeff mentioned that Pulp Cthulhu was out next, and that there were lots of products in the pipe, in particular Sandy Petersen's Call of Cthulhu adventures (2 volumes).
More generally on the product themselves, Jeff explained that the level of art would be top notch from now on, at least the same level of art as in the French Sans Détour books.
What to expect in the future?
Mythic Iceland 2nd edition this year.

No non-Gloranthan HeroQuest products in the pipe.

Fiction line re-launched this year, done with more care, because it's important.

Played the Operation Market Garden wargame that I had already played at THE KRAKEN.

Note: some pictures by Heini.
Posted by 賈尼