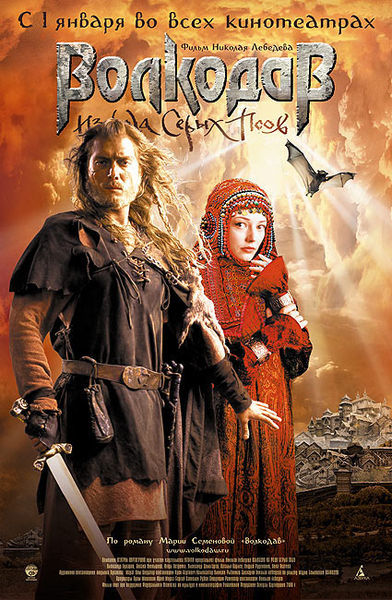 I love serendipity. Last night, I unexpectedly stumbled upon a great Russian fantasy film on television titled Wolfhound of the Grey Dogs.

The film didn't have a particularly good start though. Tranquil village, camera moves to fair-headed child playing on the outskirts of the settlement, when suddenly the village is attacked by mysterious black-clad figures on horseback, who start indiscriminately killing everybody and setting the huts afire. The mother of the fair-headed child is killed at the very end of the scene by the boss of the baddies. No, it's not the beginning of Conan the Barbarian, it's the beginning of Wolfhound of the Grey Dogs.

The film then jumps to a pretty inventive fight within a dark foreboding fortress. A lone fighter is killing all the baddies. We soon figure out that the he is the boy who survived the killing in the previous scene.

Next scene is on a damp, narrow road in the countryside, between lines of tall trees. Our kick-ass fighter is travelling with some companions when a figure clad in black appears riding a black horse with unnatural red eyes, and starts emitting terrifying noises. No, it isn't The Lord of the Rings: The Fellowship of the Ring, it's still Wolfhound of the Grey Dogs.

The film then eventually manages to get a style of its own. The hero gets to a small town that has a very distinct Slavic flavour. The town, the inhabitants, their clothing, it's all really very flavourful and very well photographed. Pretty much in the style of Vsevolod Ivanov who is one of my big influences for Second Age Umathela.

Approximately in the middle of the film there is a wedding scene between the beautiful princess of the small town and her suitor, no doubt inspired by pagan Slavic imagery, and it is fantastically rendered:


Another cool thing which differentiates the film from Conan or LotR is that the gods are very much real and intervene in the affairs of humanity. And there is a blind seer that does all sorts of D&Desque magic.

All in all, an entertaining fantasy film. I wish my Russian were good enough to read the novel the film is based upon.
Posted by 賈尼