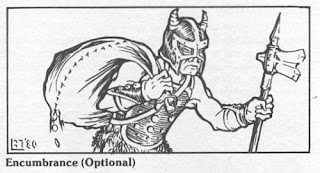 Delh the Delver has an Athletics Talent of 23. However, he is in the situation where he is carrying 10 st of gear and his “free” CAP is thus lower than his SPD by 2. Should the GM call for a SR on Athletics, Delh would use a reduced Talent of 23-2=21.
Posted by 賈尼