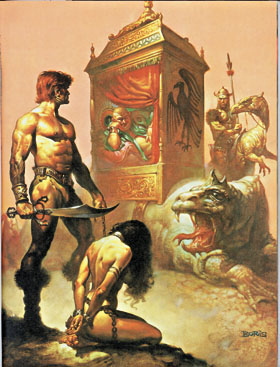 Before the fall of the Middle Sea Empire, Second Age Umathela was a major centre of God-Learnerism. New Hrestolket possibly housed the best and most celebrated God-Learner university within Glorantha. "It graduates more God Learner HeroQuesters per year than any other" (Glorantha: the Second Age, p 105).

The Gloranthan runes themselves are believed to be God-Learner in origin, or at least it was the God-Learners who spread their use throughout Glorantha. As a consequence, they became very popular and well-known in Umathela, even amongst the illiterate Umathings. After the fall of the Middle Sea Empire, their use was not discontinued — contrary to other legacies from the God Learners. The simplicity and the clear shapes of the Gloranthan runes made them even favourite tattoo patterns or shield motifs amongst the uncivilised Umathings.

At the time of my campaign, the runes in use in Umathela are categorised in the manner described hereafter.

There are many other Minor runes that are not Core runes, but which are nonetheless quite common throughout Umathela. These have several different origins:
Personal runes
These were found by the God Learners during their HeroQuests. They convey personal power to whomever manages to get them in a HeroQuest, like Defence, Force, Perception.


Deity-specific runes
These are mostly linked to minor deities— major deities are linked to major runes. These are the ones used in my campaign: Aleshmara, Balumbasta, Eler, Nontraya, Rabilis, Ty Kora Tek.

Special interest runes
These are linked to special "groups" that are neither really ethnicities nor deities: God-Learners, Undead.

Note: the runes not depicted here can be found among this list.
Posted by 賈尼