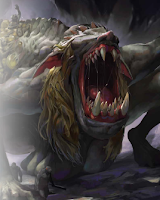 †For a description of the events of the Gods War and of the destructions it has wrought, please refer to the Guide to Glorantha, p116-117 and p684-693.
Posted by 賈尼