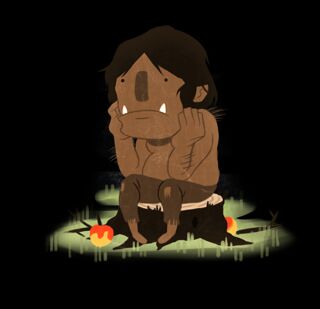 Wow! Two Deluxe Tunnels & Trolls updates in a row. Apparently some backers are getting angry at not having received anything (except the postcards we received last year).

Unfortunately most of the backers' anger seems directed at not having received any of the promised goodies, not at not having seen anything rules-wise, not even a very first draft of the rules. People are weird.

So Rick has written a lengthy update explaining that it would be cheaper to send everything at once (which makes perfect sense), and giving some information on where they are with regards to the rules. Now, that's where I am still quite worried.

I am quoting: Ever looking to tweak and revise, Ken has continued to make changes to different sections of the rules. He has given Liz at least three versions of combat, there were three versions of talents (the final version will be number four), and right now Ken and Bear are wrestling over a second version of the weapon charts. My translation is: they've just started writing the rules. Bloody hell, this means that they didn't have anything to start with when they set up the KS in the first place. Well, I guess not everyone is Kevin Crawford, who has started his KS when he already had an almost-finished version of the text and was mostly looking to finance the art.

Also, Rick has revealed that Liz has set the following tasks and goals for the months ahead: [...] My immediate priority: finish the core section of the rules. Er, again this smacks of not having anything at the moment.

This is not a big deal. My gaming life won't collapse because the DT&T KS is late, and I'd rather wait two more years and have a fantastic version of DT&T than receive some shitty version in 2014. Also I know that Liz et al are not-too-young now, and that they live in the Land of the Free™ where even the slightest health issue can wreck your life because of the financial implications, but honestly they could have waited until they had at least an alpha version of the rules or something before setting up the KS. This just reinforces my view that game designers are simply jumping on the KS bandwagon for the easy buck (or quid) nowadays.
Posted by 賈尼