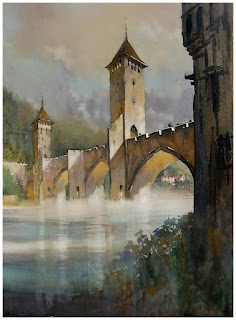 Rampart was a heavily fortified city that was built at the height of the Middle Sea Empire's extension on the banks of the river Quarni in southern Enkloso.

In that area, the river Quarni (which flows from the Tarmo mountains towards the sea) separates an ancient rainforest from the plains.

After the demise of the Middle Sea Empire, the Malki inhabitants of the city slowly deserted it. Plants quickly gained ground in the now-abandoned city, which is now in ruins.
Posted by 賈尼