For those who are not on FarceBook, I am copying here the post that Shannon Appelcline has shared yesterday on the “Glorantha Fans” group: a listing of the Aldryami’s spirits/songs/themes/gods. Missing: heroes and some of the Iri fragments.

The Sundering of Iri 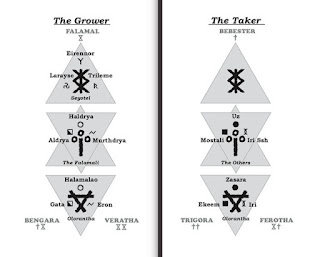 Q: Which of these survived the Darkness? Which are still worshipped?
A: The Protectors are all wounded: Halamalao isn’t as bright (and isn’t at the top of the Sky Dome), Gata is broken into thousands of pieces; and Eron has definitely been damaged, but different myths give different descriptions of that (he took some fire into himself, he wept, he bled, he gave control of the oceans to Magasta).
Haldrya is lost, along with all the white elves.
As for “survived”, that’s a funny question, because Glorantha and Trigora (the Underworld) are just two parts of the Cycle. I know that at least one of the “spiritual songs” dwells in Trigora. Maybe Larayse. But that doesn’t stop Aldryami from communicating with him/her/it. (Technically, all three of the spiritual songs died, because they were normal plants that developed the ability to sense, to move, and to act, but I don’t know if they're all still in Trigora or not.)
And there’s certainly been a lot of movement between the Underworld and Glorantha: all of the Mreli and all of the Makisanti for a start. And there have definitely been rumours and prophecies that the Vronkali who were planted during Aldrya’s Woe will be returning.
Oh, and worshipped? The vast majority of Aldryami worship Aldrya (or Murthdrya). After that, small minorities probably follow Falamal, Eron, Halamalao, and Gata. Then Bengara and Veratha. There are also some very few ‘dark’ elves who follow Ekeem, Iri, and Zasara. The others (the “spiritual songs” in the top triangle) are more abstractions and powers.