Analysis of the Red Book of Magic - Part One, Rune Magic 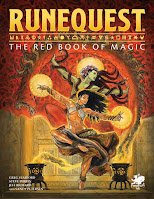 So the Red Book of Magic for RuneQuest is out. The funny thing is that, as a by-product of the Cults of Glorantha books, it should probably have been published at the same time as the two Cults books, or slightly later, but then because its illustrations were ready, whereas the art for the other books is still underway, it happened the other way round.

One annoying consequence is that the Red Book of Magic does not say which spells are learnable by whose cultists. Obviously the gamemaster is the sole arbiter at their table and they may decide that a given spell becomes available in their game but I can understand those who have complained on social media. Also, it has been explained to us fans that spell-to-cult correspondence tables would probably have taken up too much space; however, given how the Cults books are late, I reckon a free PDF would have done the trick.

Anyway, I have been perusing the book a good deal since I purchased the PDF, and I would like to share some analyses of the Rune spells.

There are 448 Rune magic spells in the Red Book of Magic. That’s a lot — there were 166 Rune spells in the core RuneQuest book, so that’s almost a threefold increase.

This doesn’t tell us much, except that Rune magic is really readily available to all cult initiates, since they usually only have 3 Rune points.

I hate to say this, but I believe the above is good input for “munchkin” players to choose how to distribute their Rune affinity values during Step 3 of the character generation process. This is particularly true for the Power and Form Runes.