The Sunday panel of the Eternal Convention was dedicated to RuneQuest 6, the latest incarnation of the classic "D100" role-playing game (and sytem); the speakers were Loz and Pete of MRQII fame, who started their own company to write, publish, and sell RuneQuest 6. Loz and Pete were unable to make it to the con this year, so they participated through a G+ hangout. It worked out pretty well despite the unreliable connection; Nick Brooke acted as the local speaker, often 'translating' questions from the audience to Loz and Pete who couldn't always hear them well. 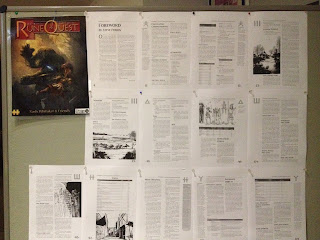 First of all, Pittel (Andreas Pittelkow, one of the organisers of the Eternal Con) had received extended preview printouts from Loz and had prepared a nice board with all the sheet laid out for us conventiongoers to read before the panel actually started. This enabled us to prepare our questions for Loz and Pete. Mysticism, the new magic system featured by RuneQuest 6 on top of the regular ones, obviously attracted special attention. 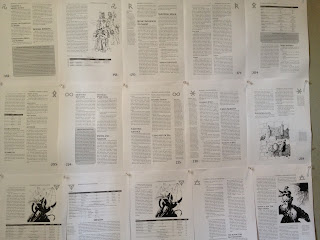 Now on with what I have been able to transcribe from the seminar.

First, the name. After all the abbreviations for the various editions of RuneQuest, RuneQuest 6 will simply be called 'RuneQuest'.
The Design Mechanism holds exclusive rights to the 'RuneQuest' name for 5 years.

The upcoming book— it will be as complete as possible in terms of rules, magic, creatures, and GM advice. Expect a softcover book with a total of 456 pages. A hardcover book is not in the works, except maybe as a future collector's item.

Amongst the novelties:
Expect a sword and sorcery feeling in the way the rules are presented, e.g., in the character examples in the side bars.

Of course, the new RQ is generic and not tied to Glorantha any longer — although the various magic systems can obviously be used to replicate Glorantha. Sorcery has been streamlined and should be more easily usable than in RQ3. Combat has an added level of complexity compared to RQ3; however, the way combat works, it should be over il less time than it used to mostly because you don't want to fight to death: you would either surrender or flee. 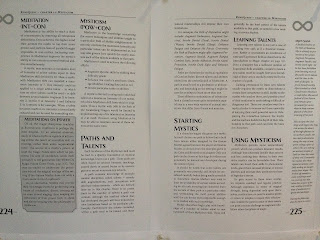 (The following stems from questions from the audience)
Opposed skill resolution: under your skill but as high as possible (so-called 'blackjack' mechanism).

Mysticism is Crouching Tiger, Hidden Dragon and jedi knights, but it will be magic point-hungry. Possibly similar to the super powers section in the BGB.

Compatibility with other D100 games: high, not only with former RQ versions, but also with D100-based games in general.