The Man Is Back! 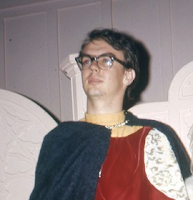 Steve Perrin, the man behind most of the original mechanisms used for the RuneQuest rules, is back! Here is the press release from Chaosium:

In the spirit of bringing the band back together, Chaosium is delighted to announce that Steve Perrin is joining the design team for Chaosium’s new edition of RuneQuest. "We knew that Steve Perrin’s place at the table, as both the creator and lead author of the original groundbreaking ‘78 and ‘79 editions of game, was a natural fit that harkens back to the genius and originality of RuneQuest", said Rick Meints, President of Chaosium.

In late 2015 Moon Design Publications and Chaosium successfully Kickstarted the RuneQuest Classic Edition campaign, a triumphant reissue of the iconic 2nd Edition of the RuneQuest rules and the supplements produced for it: Cults of Prax, Pavis, Big Rubble, Griffin Mountain, TrollPak and many others.

“We want to usher in the newest exploration of Glorantha with a tribute to the masterpiece opus of work that has come before. Part of Steve's role is to help insure that this edition contains the best possible game mechanics while maintaining backwards compatibility with RuneQuest 2", said Jeff Richard, creative director at Chaosium.

The new version of RuneQuest maintains backwards compatibility with earlier editions, while also containing a number of unique innovations that resonate with Glorantha, Greg Stafford's mythical campaign setting where RuneQuest started and to which it returns. This new edition incorporates Runes directly into both your character and the magic system you use, including their passions and motivations.

"The rules reinforce immersion in the setting even more than the original RuneQuest rules did, and ideas experimentally brought forth in Griffin Mountain reach their fruition", said Richard.

A special pre-release version of the new rules will be revealed at Gen Con later this year, along with introductory scenario sessions. A wealth of all-new campaign material and supplements for the new edition will follow.
Posted by 賈尼