I have already blogged about the canonicity, appearance and disappearance of the various Gloranthan Runes throughout the various editions of RuneQuest and HeroQuest (see my post here).

Today on social media, Jason Durall has posted the list of the Runes that player character adventurers would be “likely to use” in an average RQ:G game: 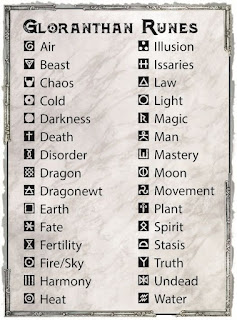 I am happy to see my beloved “modified element Runes” back, and elated to see that the Issaries Rune is still there (the question is: why would a player invest Rune affinity points in the Issaries Rune since it won’t provide access to any Rune spells?).
Not sure about the usefulness of the Undead Rune either, since there aren’t any Rune spells fuelled by the Undead Rune (according to the Cults preview, vampiric magic works differently).
The Condition Runes Infinity and Luck are missing from this table; however, this is consistent with what is written about their use on p15 of the core rules, and with the fact that there isn’t any Rune magic spell fuelled by the Infinity and Luck Runes.
I am puzzled by the presence of the Dragon and Law Runes though. They are not used in the Red Book of Magic, not used in the Cults preview. Also, even though they are extremely important in the East and in the West of Genertela, I doubt any adventurer from Dragon Pass would use them (or even see them!).
Last but not least, I miss the Ice Rune and the Shadow Rune.
Posted by 賈尼